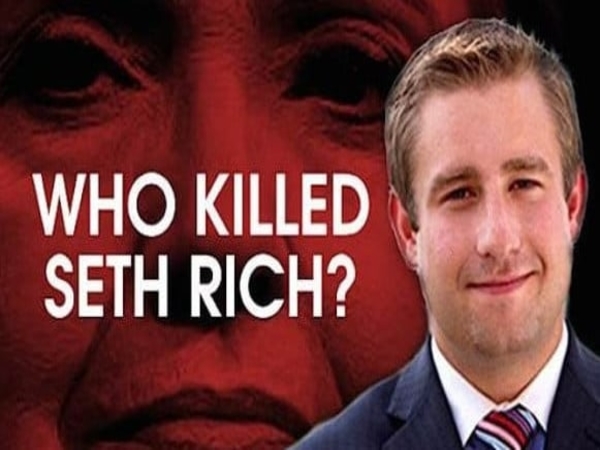 (Gateway Pundit) – After getting caught lying to the Courts about its actions related to Seth Rich, Christopher Wray’s FBI lies again and claims it did nothing wrong.

Attorney Ty Clevenger reported to the courts on Monday that despite numerous assurances from the FBI that they had no information related to Seth Rich, the FBI had been caught and therefore was lying to him all this time. (See timeline below).

In response, the DOJ immediately stepped in with a letter to the judge. In this letter the DOJ claimed the FBI had met its burden and its search would have located emails “of investigative significance”:

The DOJ next says that after the Mueller sham, Hillary’s email exoneration, the Ukraine Hoax, Fast and Furious, FISA Warrant abuse and much more, the FBI is “entitled to a presumption of good faith”:

The DOJ says that the FBI was not investigating Seth Rich’s death and it has said so and there is no related case:

The DOJ then says that the FBI never said it had searched everyone’s emails and claims it didn’t identify the emails it later released because they were not “substantive” emails:

The FBI and DOJ currently cannot be trusted. Sorry, but this is because of their recent record. The courts simply cannot accept the FBI and DOJ on its word.

This is how we got here – we reported on September 19th…

Texas businessman Ed Butowsky filed a lawsuit where he outed reporter Ellen Ratner as his source for information on Seth Rich. The DNC operative [Rich] was murdered in the summer of 2016 in Washington DC. His murder was never solved. According to Butowsky’s lawsuit, Seth Rich provided WikiLeaks the DNC emails before the 2016 election, not Russia.

This totally destroys the FBI and Mueller’s claims that Russians hacked the DNC to obtain these emails.

Butowsky claims in his lawsuit:

On November 9, 2016 Ellen Ratner admitted publicly that she met with Julian Assange for three hours the Saturday before the 2016 election. According to Ratner, Julian Assange told her the leaks were not from the Russians, they were from an internal source from the Hillary Campaign.

We later reported that Butowsky and his attorney, Ty Clevenger, requested and obtained documents from the FBI related to their case which we were able to analyze.

According to the duo, they obtained the transcript from former FBI Chief of Staff James Rybicki where he states that the Obama White House was the entity that was pushing the Russia conspiracy as early as October 2016 –

Newly released documents from the FBI suggest that the Obama White House pushed intelligence agencies to publicly blame the Russians for email leaks from the Democratic National Committee to Wikileaks. This afternoon I received an undated (and heavily redacted) transcript of an interview of James Rybicki, former chief of staff to former FBI Director James Comey, that includes this excerpt: “So we understand that at some point in October of 2016, there was, I guess, a desire by the White House to make some kind of statement about Russia’s…” and then the next page is omitted.

Trump friend Roger Stone was indicted after being charged by the Mueller gang based on this key question – who provided the DNC and Podesta emails to WikiLeaks?

The corrupt FBI and Mueller team claim the emails were hacked but neither entity inspected the DNC server which was supposedly hacked. They have provided no proof of this.

The DNC instead hired a firm Crowdstrike, with connections to Mueller and former Obama Director of National Intelligence James Clapper, who provided a redacted report to the FBI and Mueller stating the emails were hacked by Russia.

Former NSA whistleblower Bill Binney claims he has evidence the DNC emails were not hacked but copied most likely on to a flashdrive or something similar.

Bill Binney, is more than an expert, he is “A Good American”. Binney developed a system for the NSA that would have identified the 9-11 terrorist attack before it occurred, but the NSA shut down his project. This is all documented in Oliver Stone’s “A Good American”. We encourage you to watch this video about Binney’s work with the NSA and their subsequent follow up after 9-11 below –

When Ty Clevenger requested documents from the FBI related to any investigation into the death of Seth Rich, they replied that they never investigated Seth Rich and they don’t have any records on him –

But when documents were requested from the NSA, they replied that they won’t release their records regarding Seth Rich because it’s a matter of national security –

USC 552(b)(1) states: This section does not apply to matters that are—

(A) specifically authorized under criteria established by an Executive order to be kept secret in the interest of national defense or foreign policy and (B) are in fact properly classified pursuant to such Executive order;

We didn’t believe the FBI never investigated the Seth Rich murder even though the NSA said the case was a matter of national security.

Clevenger claimed that the FBI did not perform its search in good faith after first declaring that they did not have to perform the search. Clevenger also claims that his client, Ed Butowsky, has information that the Seth Rich’s devices were inspected and he wants the results of those investigations –

Clevenger wants the FBI to continue their search and not cover things up because their first review for documents related to Seth Rich was inadequate.

Clevenger has requested that the US Department of Justice provide him documents he is requesting based on some new information and Clevenger also asked the court to allow him to compel the FBI to produce Mr. Hardy (the individual at the FBI who has not provided documents requested) and the chief of CART as witnesses at an evidentiary hearing –

Clevenger made his request based on some new information that he obtained related to actions the FBI took related to Seth Rich. According to Michael Isikoff who is formerly with Newsweek and now with Yahoo (yes, the same individual involved in the Russia collusion hoax) the FBI had numerous activities related to Seth Rich. On page two of Clevenger’s motion, Clevenger notes the following discussion that can be heard on Isikoff’s podcast –

So according to Deep State hack Isikoff –

Ty Clevenger reported that he received a response from the FBI and they basically said that the DOJ was lying. Clevenger writes –

Now, back to today’s events. In the response filed this afternoon, the FBI attacked the statements of Mr. Isikoff and Ms. Hines as “unsworn” and “hearsay,” and insisted that it did not need to conduct any more searches for records about Mr. Rich. Mind you, I’m just asking the FBI to pick up the phone and call its Computer Analysis Response Team (“CART”) and ask whether CART has any records about Seth Rich. The FBI refuses to do that, even though it has twice called the Washington Field Office (“WFO”) to ask whether WFO had any records about Mr. Rich. According to the FBI, any CART records would have shown up in the index search of the FBI’s Central Records System (“CRS”). As I explained in a September 17, 2019 motion, however, the FBI had already admitted that not everything gets entered in the CRS. And now we’ve got the former prosecutor who was assigned to Seth Rich’s case admitting that the FBI investigated his electronic devices… yet the FBI refuses to search for records in CART, the place where such records would most likely be found. Suspicious, no?

Clevenger requested a meeting with the FBI but he was out of luck. The FBI’s denials stuck. It looked like the FBI was trying to hide something and either the FBI or the DOJ are a bunch of liars, or maybe both?

After previously claiming no FBI records could be found related to Seth Rich, emails were uncovered. These emails weren’t just from anybody. These emails were between FBI lovebirds Peter Strzok and Lisa Page, the two most corrupt individuals involved in the Russia Collusion Hoax.

In a set of emails released by Judicial Watch on January 22, 2020, provided by a FOIA request on Peter Strzok and Lisa Page, multiple emails were found referring to Seth Rich:

The emails are heavily redacted but we do know that Jonathan Moffa was also involved in the email exchange:

What’s also unreal is that the individual releasing the emails to Judicial Watch, David M. Hardy, is also the Deep State crook who claimed he couldn’t find any emails related to Seth Rich to Ty Clevenger. Per Clevenger, he was never contacted by Hardy or the FBI to notify him that Seth Rich emails have been found.

Clevenger has prepared an email and he will notify the court tomorrow and will provide the following complaint to US Attorney Durham, US Attorney Donoghue and DOJ Inspector General Horowitz:

In a post yesterday, on Wednesday, January 29, 2020, we noted the following about the emails coming out over the weekend ==>>

The initial response to the query from the Public Affairs Office of the Washington Field Office is telling. The Agent could have responded very simply–The FBI was not involved in any facet of the Seth Rich investigation. This was a local matter handled by the DC Police. But that is not how the Agent responded. And then he took the step of adding in people at FBI Headquarters. How do we know this? The message from the Washington Field Office at 7:09 pm was sent to the Criminal Division to Agents Moffat and Strzok. Ty Clevenger now has ample ammunition to return to court and insist that the FBI be required to identify all agents involved in these email chains and to discuss what they knew about the Seth Rich case. David Hardy declared under the penalty of perjury that there were no such emails. I doubt that the two judges involved in the relevant cases on this matter will be happy to learn that the FBI stonewalled a valid FOIA request.

Christopher Wray’s FBI is still corrupt and dishonest and no effort has been made to clean house. There is likely no reason for the redactions in the emails to Judicial Watch as well.

The FBI continues to lie and cover up its criminal deeds. Director Wray is doing nothing to clean house. He is part of the problem. The Deep State must go. Americans demand the truth!