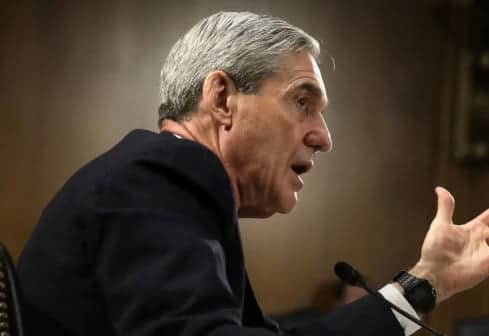 (Gateway Pundit) – Big news last night (Monday). Buried amid the panic over the corona virus. Robert Mueller’s prosecutors got the green light to flush down the toilet one of their major cases allegedlng that Russia hacked the 2016 U.S. Presidential election–U.S. District Court Judge Dabney Friedrich on Monday evening granted the DOJ’s motion to dismiss the case against Concord Management and Consulting. This is more than a black eye. It is an indictment and rebuke of a corrupt group of prosecutors who worked for Special Prosecutor Robert Mueller. They filed a case without foundation and smeared a group of foreigners that they (the prosecutors) did not think would fight back. Big mistake.

Let me take you back to February 2018. The headlines of the New York Times, Washington Post, LA Times and The Atlantic blared the following propaganda:

This was it. Real proof that the Russians helped elect Donald Trump. Here is the Atlantic’s breathless take on the matter:

The indictment details highly specific allegations—including names, dates, and the text of private messages—that appear to substantiate central elements of the U.S. intelligence community’s assessment that Russia made an active, concerted effort to subvert American democracy.

Did you catch that? This indictment is prima facie evidence that the flawed, disingenuous Intelligence Community Assessment put out in January 2017 was “substantiated.”

The truth challenged former Director of the CIA, John Brennan, also has some major crow to eat. That buffoon took an unfounded victory lap reacting to the news of the indictment of Concord Management:

“Claims of a ‘hoax’ in tatters,” John Brennan, the former CIA director, said in a tweet. “My take: Implausible that Russian actions did not influence the views and votes of at least some Americans.”

Message for John Brennan–you cemented your status as a certified moron and a walking, talking hoax. The only thing in “tatters” is your claim to be a competent commentator on legal matters and intelligence issues.

The indictment that Brennan so enthusiastically and prematurely celebrated was flushed down the toilet on Monday, March 16, 2020 by the very prosecutors who brought it in the first place. They finally realized they had no case and asked the Judge to “dismiss with prejudice.” The Judge said “yes.” For those of you who are not lawyers, the phrase, “dismiss with prejudice” is the legal equivalent of a slam dunk by Lebron James in basketball:

Let us briefly revisit what Mueller and his band of white collar criminals alleged in the February 2018 indictment of Concord Management et.al.(Note–I replace the term “Defendants” with the actual name, e.g. IRA and Concord):

Defendant INTERNET RESEARCH AGENCY LLC (aka IRA). . . . worked in various capacities to carry out IRA’s interference operations targeting the United States. . . . Beginning as early as 2014, the IRA began The IRA received funding for its operations from Defendant YEVGENIY VIKTOROVICH PRIGOZHIN. The IRA had a strategic goal to sow discord in the U.S. political system, including the 2016 U.S. presidential election. Concord personnel posted derogatory information about a number of candidates, and by early to mid-2016, Concord’s operations included supporting the presidential campaign ofthen-candidate Donald J. Trump (“Trump Campaign”) and disparaging Hillary Clinton. Concord made various expenditures to carry out those activities, including buying political advertisements on social media in the names of U.S. persons and entities. Concord also staged political rallies inside the United States, and while posing as U.S. grassroots entities and U.S. persons, and without revealing their Russian identities and ORGANIZATION affiliation, solicited and compensated real U.S. persons to promote or disparage candidates. Some Concord personnel, posing as U.S. persons and without revealing their Russian association, communicated with unwitting individuals associated with the Trump Campaign and with other political activists to seek to coordinate political activities.

All of this is an unsubstantiated allegation. No evidence. No proof that would have held up in court. The Mueller team folded in the face of a real lawyer, hired by Concord Management. That is what the Mueller team never counted on.

But this was not the first setback for the Mueller team in this case. They were admonished by the Judge last year for falsely and improperly allegeding that the IRA was a Russian Government tool for intelligence operations.

On April 25, 2019, Concord filed the instant motion in which it argues that the Attorney General and Special Counsel violated Local Rule 57.7 by releasing information to the public that was not contained in the indictment. Concord’s main contention is that the Special Counsel’s Report . . . improperly suggested a link between the defendants and the Russian government and expressed an opinion about the defendants’ guilt and the evidence against them. The Court ordered the government “to refrain from making or authorizing any public statement that links the alleged conspiracy in the indictment to the Russian government or its agencies.” The Court further ordered that “any public statement about the allegations in the indictment . . . must make clear that, one, the government is summarizing the allegations in the indictment which remain unproven, and, two, the government does not express an opinion on the defendant’s guilt or innocence or the strength of the evidence in this case.”

The Judge’s order for the Prosecutors to cease linking the alleged conspiracy in the indictment to the Russian government was vindicated with the final decision to throw the case out for good. If the Mueller prosecutors actually had real evidence that the Russian government interfered in the 2016 US Presidential contest then they would not have dropped the case permanently. If it was a matter of figuring out how to introduce intelligence information to buttress their evidence they would have left the door open for a future revival of the case. But they did just the opposite. They asked that the charges be dropped completely and permanently.