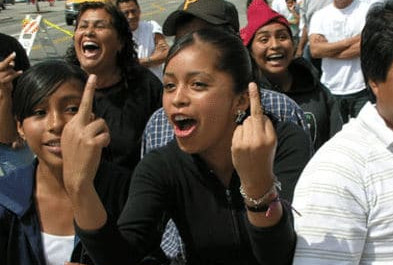 (Gateway Pundit) – The city of Cambridge, Massachusetts just passed a new law which seems to give illegal immigrants more rights than American citizens.

Under the new law, the city’s police are advised not to arrest illegal immigrants who are caught driving without a license.

The city is doing this specifically to shield illegals from ICE.

Under new Cambridge law, undocumented immigrants won’t be arrested for driving without a license. It’s the law that you need a license to drive. But, if you’re undocumented and driving without a license in Cambridge, police have been advised not to arrest you for that. It’s all part of a new law that passed unanimously in the city, which encourages police to summons unlicensed drivers instead of arresting them. The procedure has already been practiced for a while, but city leaders said they felt compelled to officially make it a law, in fear of what could happen to immigration laws should President Trump be re-elected.

“We need to protect our community members from a federal government that’s out of control,” said Cambridge City Councilor Quinton Zondervan. “There are no other reasons for the police to arrest someone, give them a court summons instead which keeps them out of the clutches of the Trump administration.” Currently, Massachusetts requires drivers to show proof of legal status in order to obtain a driver’s license, a move that many have opposed saying it makes roads more dangerous.

Even more astounding, is the fact that local officials seem proud of this move.

Illegal immigrants in Massachusetts city won’t be arrested if they drive without a license. Police had already been advised to follow this protocol for some time, but the council voted unanimously to make it a law, according to the Tuesday report. The law doesn’t restrict police from arresting drivers if they have additional violations besides the lack of a driver’s license. It does, however, keep police from asking if a driver is a legal citizen. The Massachusetts Legislature’s Joint Committee on Transportation gave its support for a different bill earlier in February that would allow illegal immigrants to obtain state driver’s licenses… Cambridge, which is home to Harvard University and the Massachusetts Institute of Technology, became a sanctuary city in 1985, and city officials have become more vocal about sticking to the status since President Trump took office. “At the end of the day, we have to have a real conversation and understand that these folks seeking asylum are people,” Cambridge Mayor Marc McGovern said during a Fox News hit in 2019. “They are not cargo.”

What happens when a citizen gets arrested for this and then sues the city?

How is any of this even legal?