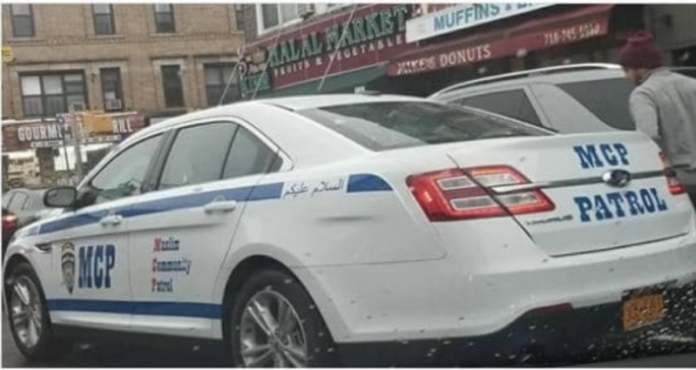 While this story isn’t new to those paying attention to Rebel Media’s or Laura Loomer’s 2018 reporting, the Muslims in Brooklyn have become emboldened and expanded their fleet of patrol cars and added more patrol officers this year.

The Muslim Community Patrol encroached on the wrong territory and are now in a nasty beef with the notoriously dangerous black street gang “Bloods” after an altercation in front of the Masjid Taqwa mosque in Brooklyn on Friday.

After an explosive altercation in front of a mosque in Brooklyn, a member of the Bloods raised his jacket and flashed his gun, warning the Muslim Community Patrol, “This is not over. It’s just begun.”

According to a witness, the Bloods in this part of New York are harder core than other gang members.

“These Blood dudes are from 8th Avenue in Brooklyn, and they are one of the harder core Bloods over there. So those MCP officers are going to get some beef.” – a witness said according to The Clarion Project.

On December 10, a verbal altercation began in the evening when a teenage boy allegedly “disrespected” a Muslim woman outside the Brooklyn mosque on Fulton Street. The boy did not touch the woman, bystanders say, but did speak to her. A Muslim Patrol member grabbed the teen by the collar and threw him against the gate of the Masjid Taqwa, a local mosque. While the boy was pressed firmly against the fence, the Muslim Patrol member held him by the neck and lectured him. “That MCP [Muslim Community Patrol] officer snatched that boy up,” one witness said. “He grabbed him by the collar and threw him up against the gate and held onto him by the neck area.” After the rebuke, the boy complained to his father, who happens to be a senior member of the local Bloods. The father rallied six other Blood members to join him and went to Masjid Taqwa, where at least one Blood member brandished a weapon. “One of them was strapped,” a witness said of a Blood member who had a firearm. “He raised his jacket and flashed that gun. Those dudes came out there to shoot up that Masjid. The father, he wanted to mess that MCP officer up.” According to the witness, the father said to the Muslim Patrol officer, “Dude, I’m going to bust in your f—— mouth if you ever put your hands on my child again.” “It was going to be something big out there,” one witness said. “The Bloods were shouting, ‘You all are running around here playing like you’re the real police. You all want to put your hands on these little kids. We don’t give a f— about your Masjid. F— your Masjid.”

The New York Police Department showed up and told the Bloods and Muslim Community Patrol to disperse.

The Muslim Community Patrol in Brooklyn is reminiscent of the Sharia police in London where the Muslims enforce Sharia law in neighborhoods by harassing homosexuals, targeting people who drink alcohol and telling women in mini skirts to cover up — it looks like they just messed with a group of angry gang members who are not going to let this beef go any time soon.