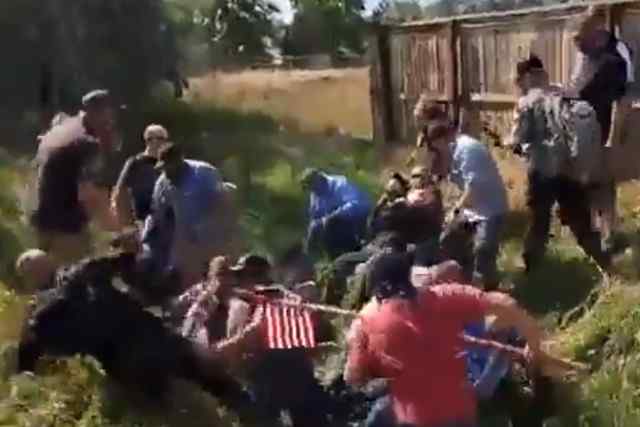 (Infowars) – An Antifa mob who invaded a suburban neighborhood were pushed out by residents, leading to a ‘mosh pit’ fight with one neighbor using an American flag to keep a goon from pulling a knife.

The mob targeted a pro-police rally in a residential area of Ft. Collins, Colo., on Saturday, which was livestreamed.

The video shows a group of citizens, including an old man in a wheelchair, who refuse to be intimidated by staying inside their homes or from leaving their rally while anti-white, anti-American thugs vandalize their neighborhood.

“Nobody wants Antifa in the neighborhood, nobody wants them here,” the cameraman says.

The video shows them driving the vermin out:

Once a brawl breaks out, one resident says “everybody, keep your hands off your weapons. Keep punching each other in the face, just don’t shoot anybody.”

At one point, a man uses his American flag hanging on a dowel rod to pin down one Antifa member after someone declares “he’s got a big knife!”

Here’s some comments worth reading:

And here’s a full stream of the rally: