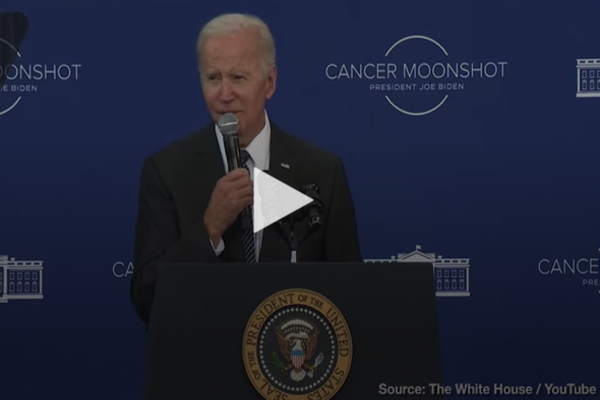 (breitbart) – President Joe Biden joked with cancer survivors Monday, urging them not to jump from a balcony above him as he spoke at the JFK library in Boston.

“I want to thank all of you. The cancer patients, survivors, caregivers. And don’t jump from up there, okay?” He added, motioning up to a group of people on a balcony at the museum.

Biden delivered a speech revisiting his “cancer moon shot” project from 2016, vowing to put more effort into the goal of curing the disease.

He reflected on President John F. Kennedy’s famous moonshot speech 60 years ago that put America on the path to landing a man on the moon before the Soviet Union.

“I believe that we can usher in the same unwillingness to postpone, the same national purpose … to end cancer as we know it and even cure cancers once and for all.”

Biden again stated his desire to cure cancer, recalling the death of his son Beau Biden who died of brain cancer.

“I give you my word as a Biden, this cancer moonshot is one of the reasons why I ran for president,” he said.

Biden said his project would now be “supercharged” under his presidency, across all branches of government.

He stumbled while speaking about driving the “whole of government effort” from NASA to the Defense Department, noting the Pentagon has the “ability to calculate the Energy Department to a million billion calculations per second.”