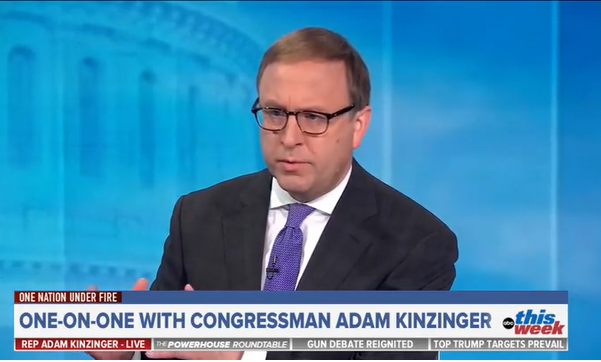 (breitbart) – Representative Adam Kinzinger (R-IL) said Sunday on ABC’s “This Week” that a federal law raising the age to buy guns to 21 was a “no-brainer” following the mass shooting at Robb Elementary School in Uvalde, TX.

Kinzinger said, “I think raising the purchase of a gun purchase to 21 is a no-brainer. If you look at the Parkland shooting, Buffalo, this shooting, these are people under the age of 21. We know that the human brain develops and matures a lot between the ages of 18 and 21. We raised without really so much of a blink, the age of purchasing cigarettes federally to 21.”

Anchor Jon Karl said, “The issue of raising the age it’s remarkable to look back at all of these shootings and see how many of them are done by individuals, men, young men 18 to 21, even Newtown, the shooter was 20, his mother actually got him the gun, but many of them are bought legally, but let me ask you about your journey on this, because you were once an A rating from the NRA, you owned an AR-15. Do you still own an AR-15?”

Karl said, “Help me understand, how did you go from being somebody who was right in line with the gun lobby on this to somebody who thinks it’s time to change these laws?”

Kinzinger said, “Look, it’s a journey of, you know, getting sick of seeing the mass shootings. I’m a strong defender of the 2nd Amendment. One of the things that I believe for a strong reason that as a person who appreciates the Second Amendment, we have to be the ones putting forward reasonable solutions to gun violence.”