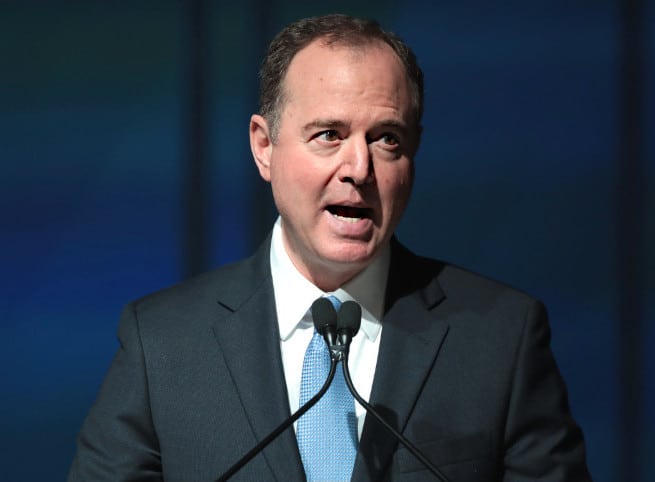 (Gateway Pundit) – “Jerry, Jerry, JERRY!”, a frustrated Lead House Manager Rep. Adam Schiff (D-CA) could be heard calling out to his fellow Manager Rep. Jerrold Nadler (D-NY) as Schiff stood up only to see Nadler race by him to the microphone to answer the final question in the two day question and answer session part of the Senate impeachment trial of President Trump. Bemused looks on the faces of President Trump’s legal team and Senate staffers were posted online along with multiple videos of the Abbott and Costello scene (or maybe Seinfeld, one can imagine an anguished Jerry crying out, Newman!”, or as others have called it, a Leeroy Jenkins moment.)

The closing question, number 180, was an open ended softball from Democrat senators to the Managers, “Could you please respond to the question just given by the president’s counsel, and provide any other comments the Senate would benefit from hearing, before we adjourn for the evening?” The asking of the question itself devolved into a two-minute clown show as Democrat presidential candidate Sen. Amy Klobuchar (D-MN) had to go up to a befuddled presiding officer Chief Justice John Roberts and correct by hand a botched question that she had sent up to be asked.

There has been talk of tension between Schiff and Nadler over Nadler’s fiasco at the beginning of the trial where he berated senators and basically accused Republicans of treason for not voting with the Democrat Senate minority on allowing new evidence and new witnesses at the trial. Nadler’s tirade drew a rare admonishment from Chief Justice Roberts. Observers noted it appeared Nadler had been demoted Thursday as Rep. Hakeem Jeffries (D-NY) was seated next to Schiff and has been clocked getting more time to speak than Nadler. Rumors are that Schiff wants to run for the CA senate and Jeffries wants to replace Pelosi. If they lose the House in Nov. real justice prevails and both clowns will have to sit down.

On to the show.

In slo mo via the Trump campaign:

Close up of Senate staffers cracking up with one doing a facepalm to hide her laughter.

Nadler’s complete answer was posted by the Democrats, but they clipped confusion around the question and the race to the mic.

The only readily available video of the Klobuchar question fiasco that led to the Nadler-Schiff tiff was posted by someone who posits a secret message being sent. However, it would appear the only message sent was one of incompetence by the Democrats.

“KLOBUCHAR EXPLAINS: “So I had a different question, but we only had 4 minutes left, so I did the closer question and it had Cardin’s name on it, I put my name on it, but I guess I wrote AK and it wasn’t enough, so I went down there and fixed it myself in a very hands on manner.”

UPDATE: President Trump weighs in, “Nadler ripped final argument away from Schiff, thinks Shifty did a terrible job. They are fighting big time!”