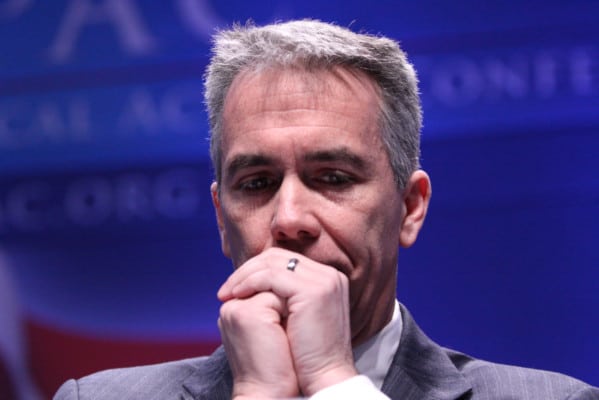 A partial transcript is as follows:

JOHN BERMAN: Questions remain about who won the Democrat caucuses in Iowa, the Republican side was much more clear. President Trump cruised to victory with 97 percent of the vote. Joe Walsh receieved about 1 percent of the vote… You have something to say this morning. JOE WALSH: I’m ending my candidacy for President of the United States. Look, I got into this because I thought it was really important that there was a Republican out there every day calling out this president for how unfit he is. I want to stop Trump, I believe he’s a theat to this country. He can’t be stopped within the Republican Party. Nobody can beat him. It’s Trump’s party. It’s not a party, it’s a cult. He can’t be beat in the Republican primary, so there’s no reason for me or any candidate to be in there. The party has become a cult. JOHN BERMAN: You thought there was some sort of an opporunity where you could convince Republicans in these states. What changed? WALSH: I didn’t see how cult-like the party was. Ten states around the country canceled there primaries and caucuses, the state parties are beholden to Trump. The conservative media world, Fox News and all of rest, wouldn’t give me the time of day. I’m a Republican candidate for president, but they bow down in front of their king. And then out there everyday talking to Republican voters, I just became conviced that these folks had been fed nothing but lies and mistruths about President Trump and they can’t be gotten back. BERMAN: You’re out of the Republican race, what now?

WALSH: The same thing. I’m going to do whatever I can to stop Trump. I think this is one of those rare moments in American history where conservatives and liberals, Republicans and Democrats, independents and moderates, have got to come together and stop this guy. He’s everything our founding fathers feared. I can’t stop him in a Republican primary, but I can sure do my level best to try to stop him outside of a primary by bringing people together. BERMAN: So you’re going to try to help elect the Democratic nominee, is that what you’re saying? WALSH: Any Democrat. Donald Trump is a dictator, he’s a king. He literally is the greatest threat to this country right now. Any Democrat would be better than Trump in the White House right now.