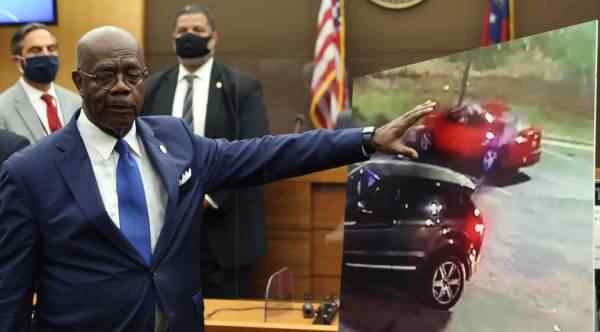 (Gateway Pundit) – In a high-profile press conference carried live by all news networks on Wednesday, Fulton County District Attorney Paul Howard claimed police officer Garrett Rolfe did not administer CPR after shooting Rayshard Brooks, who had wrestled a Taser away from him before trying to flee.

Rolfe’s body camera came off his uniform after Brooks wrestled and punched him, but it continued working. While there was no video of the aftermath of the shooting in a Wendy’s parking lot, the audio continued to roll.

The jerky bodycam footage captures him kneeling on the ground and administering CPR to the bleeding man, The Daily Mail reports.

“Rolfe administered CPR until the ambulance arrived and can be heard repeatedly calling Mr. Brooks’ name as he tried to keep him alive,” said the Mail. His partner, Officer Devin Brosnan, assisted.

Howard said in his press conference that following the shooting, the officers failed to give Brooks any medical attention for two minutes and 12 seconds.

Lance LoRusso, Rolfe’s lawyer, said this in a statement:

“Suddenly, without warning or provocation, Mr. Brooks chose to violently attack two uniformed police officers. Officers Brosnan and Rolfe used the least amount of force possible in their attempts to place Mr. Brooks into handcuffs. They attempted to leverage him to the ground while giving him loud, clear verbal commands. In response, Mr. Brooks continued actively resisting lawful efforts to arrest him. He then escalated his resistance by punching Officer Rolfe in the face committing several counts of felony obstruction of an officer…. In an effort to place Mr. Brooks under arrest and stop his assault, Officer Rolfe lawfully deployed his TASER twice, but it had no effect on Mr. Brooks.”

“Mr. Brooks continued his assault and disarmed Officer Brosnan, stealing his city-issued TASER committing a robbery, another forcible felony under Georgia law. … Mr. Brooks, then armed, began running through a crowded parking lot. Mr. Brooks was lawfully under arrest and Officer Rolfe pursued him. Officer Rolfe had deployed his taser and held it steady in hopes the prongs would catch onto Mr. Brooks body and neutralize him. Unfortunately, that didn’t occur.”

“Instead of merely trying to escape, Mr. Brooks reached back with his arm extended and pointed an object at Officer Rolfe. Officer Rolfe heard a sound like a gunshot and saw a flash in front of him. Fearing for his safety, and the safety of the civilians around him, Officer Rolfe dropped his taser and fired his service weapon at the only portion of Mr. Brooks that presented to him – Mr. Brooks’ back. Officer Rolfe immediately stopped firing when Mr. Brooks fell to the ground since there was no longer an imminent threat towards Officer Rolfe or others.”