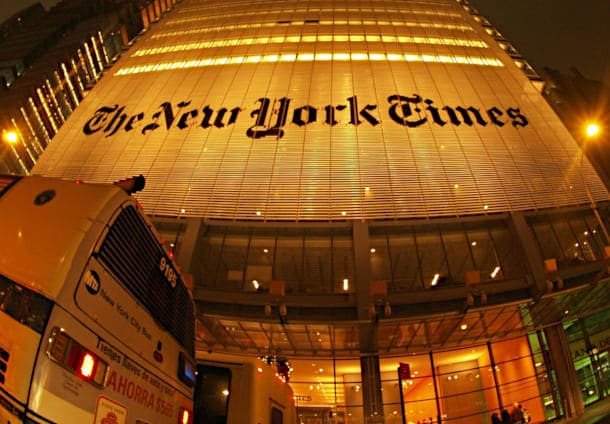 In his message, the president recommended that states procure respirators and ventilators because it would be faster — but added that the federal government “will be backing you.”

The Times journalists omitted the bulk of the president’s statement as they shared the story on social media. The misleading, partial quote was also boosted by a CNN correspondent and became the lead headline at the left-wing Huffington Post.

Despite growing online backlash to this misinformation, the journalists have yet to delete or retract their comments.

The eight journalists tweeted a link to a Times article published Monday that contains President Trump’s full statement to state governors in which the president recommended that they shouldn’t wait for the federal government to fill the growing demand for respirators needed to treat people with coronavirus.

But in the body of their posts, the Times journalists left out most of what the president said.

Times national correspondent Julie Bosman tweeted only the first third of the president’s statement, leaving out the part where he said the federal government will back the states.

Mara Gay, a member of the Times editorial board, also left out most of what the president said. She also falsely accused the president of telling governors that “they are on their own.” In actuality, the president said in his full quote that the federal government “will be backing you.”

Just ten days ago, Gay was involved in another embarrassing episode for corporate media, where she and MSNBC anchor Brian Williams horribly botched basic math to claim that billionaire Michael Bloomberg could have “given every American a million dollars.” In reality, the amount he spent amounts to less than $2 per person.

The official Times twitter account also omitted the majority of the president’s quote when it pushed out the article on Monday.

CNN’s Oliver Darcy also shared the incomplete quote and has not addressed the dozens of fact checks in response.

All of the posts were still up at the time of this writing, despite mounting criticism about their accuracy.