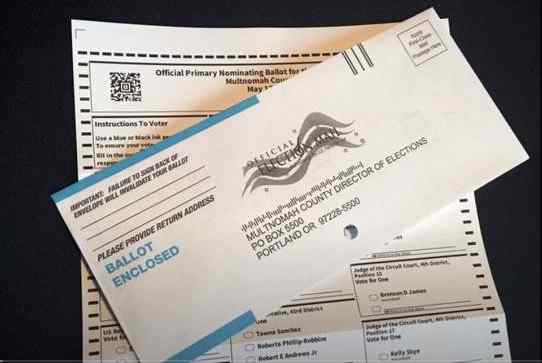 (Gateway Pundit) – In a Gateway Pundit exclusive a non-citizen in Oregon recently came forward and explained how the Oregon government automatically registered her to vote.

“I just want to highlight to American citizens this does happen. I don’t know why there’s this blind belief that it cannot happen. It does happen, it happened to me,” says a woman who has come forward to tell the story about how she, as a non citizen, ended up getting registered to vote without even knowing it, and had ballots sent to her.

Ever since the advent of vote-by-mail, elections integrity activists have pointed out all the different ways that such a system could be compromised.

While rumors have circulated for years that illegal aliens and non citizens were voting, most of the evidence pointing to such has been circumstantial, with few traces of actual hard evidence.

As news of the ballot scandal continues to spread through Oregon, a new problem is rearing its head for the Democrats and those in charge of elections: A legal immigrant, but non-citizen, who is going through the process to become a citizen, has evidently been receiving ballots.

This whistleblower has come forward to tell her story about how she started receiving ballots in the mail, addressed to her, after she had changed her address with the DMV and postal service, both of which apparently have the power to input data that affects one’s voter registration.

Ballots started arriving in her mailbox in 2016, and continued through 2018, for a total of five elections. She says she likely would have received a sixth ballot had she not taken the steps to cancel her voter registration.

Here’s a screencap from the video showing she had been sent five ballots:

“I started receiving local ballots first, and I ignored four of them, because I was still confused about it. I thought that the state had to know better, if they were sending it to me, they probably knew that I could vote, they were inviting me to vote, that’s what I kind of thought,” she says.

The likely culprit is Oregon’s fairly new Motor Voter law, which automatically registers anyone to vote who does certain transactions with the DMV. Again, Democrats said that only citizens would be added to the voter registration database. Somehow, somewhere, perhaps by intent, there was no such mechanism that prevented the whistleblower from being registered. State officials have also told everyone that cards would be sent out to anyone registered under the Motor Voter law so new voters could pick which party they wanted or decline to be registered. The whistleblower says she never received any such card.

Here’s another screencap from the video of official elections documents showing that she was, indeed, registered to vote and had requested to be removed because she wasn’t a citizen:

She tried to get the attention of election officials, but they were apathetic. They wouldn’t remove her from the voter rolls on their own. She had to fill out a special form asking to be removed. Even after that, her county elections director couldn’t give her a straight answer as to how she was registered to vote.

She says she was surprised to see a ballot in her mailbox. “Because I love America, and I want to integrate into the culture and everything, I was happy to have a voice, I guess, through the ballots, but I was still very wary of whether I should or I shouldn’t. I definitely didn’t have ill intent.”

Equally concerning, the way the ballots are processed at the elections offices leave no way for anyone to recognize if a fraudulent vote had been cast.

She goes on to explain that even as a non citizen, she has a Social Security number and driver license, which are apparently enough proof to the DMV and Oregon’s secretary of state to consider someone as being legally able to vote. The elections director that the whistleblower spoke with even admitted that other, similar cases have happened of non citizens getting registered to vote.

And as usual, the DMV is the scapegoat, even though elections officials are supposed to crosscheck all of the info they get from the DMV.

She is a bit concerned that this could affect her legal status, even though this incident was not her fault.

There is no telling how many other non citizens are registered to vote in Oregon and have been receiving ballots.

Oregon officials evidently don’t care and have not been doing their due diligence to verify that everyone being registered is a citizen and legally allowed to vote. Obviously there is a lack of oversight.

Perhaps this is A.G. Barr’s cue to launch a full investigation into Oregon’s vote-by-mail system. Perhaps pull a pool of names and cross check them for legal status.