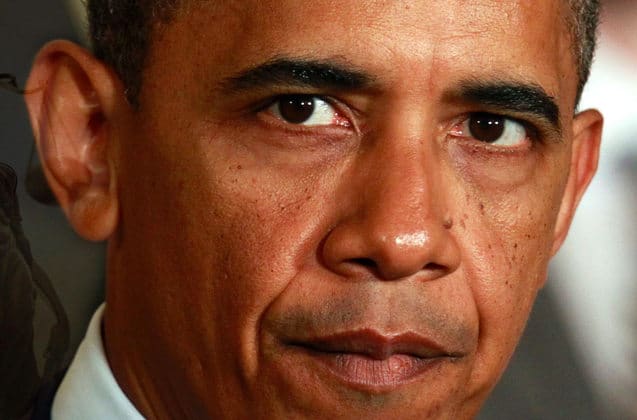 (Gateway Pundit) – Disgraced former President Barack Obama appears to be in a panic. General Flynn is now in the clear and the Durham investigation is ongoing. More documents are about to drop.

There are rumblings that former members of his FBI (e.g. FBI General Counsel James Baker) have flipped and are working with Durham.

Obama’s Deep State henchmen who set up General Flynn and the crooked politicians and media hacks who supported them are terrified.

An audio of former President Barack Obama, whose Administration spied on the Trump team and Administration, was released by deep state reporter Michael Isikoff at Yahoo News on Friday night.

In the “call” which appears totally set up, Obama is concerned about the rule of law.

Here is the transcript:

“The news over the last 24 hours I think has been somewhat downplayed — about the Justice Department dropping charges against Michael Flynn,” Obama said during a virtual discussion with members of the Obama Alumni Association. “The fact that there is no precedent that anybody can find for someone who has been charged with perjury just getting off scot-free. That’s the kind of stuff where you begin to get worried that basic — not just institutional norms — but our basic understanding of rule of law is at risk. And when you start moving in those directions, it can accelerate pretty quickly as we’ve seen in other places.”

He knows he was caught.

Obama hopes these “leaked” comments will help him save face.

President Trump was on FOX and Friends on Friday morning and he shared the following (at the 5:40 mark) regarding the crooked actions taken by the Obama Administration:

It’s a very, very sad thing for our country. That’s why Schiff, Shifty Schiff, that’s why he didn’t want to release any of those documents. And there’s more to come, from what I understand and they’re going to be far greater than what you’ve seen so far. And what you’ve seen so far is incredible, especially as it relates to President Obama. Because if anyone thinks that he and sleepy Joe Biden didn’t know what was going on they have another thing coming.

President Trump also tweeted out a message to the Deep State, members of the crooked Obama Administration, and their accomplices in the media:

No wonder Obama is freaking out – next week could be hellish for this horrible crooked former president.