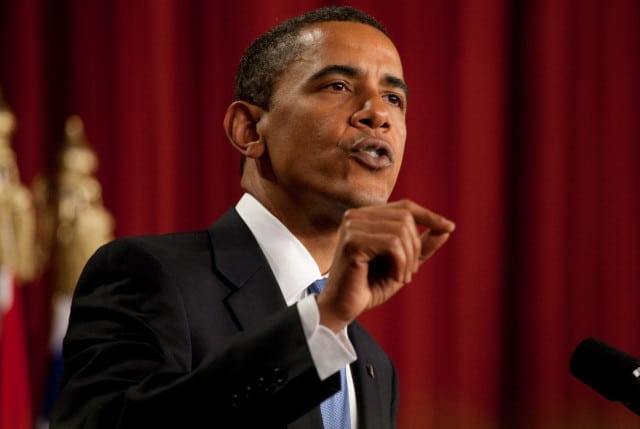 (Gateway Pundit) – Former President Obama, the only President in US history who had his FBI and other Intel agencies spy on the opposition party candidate, claims that he created the great economy that Americans are enjoying today.

The only thing Obama created was debt and massive job losses with his horrible economic recovery.

President Obama’s policies were a disgrace and a failure. He doubled the national debt in spite of zero interest rates from the Fed. His recovery was the worst in US history.

Also, Obama’s assertion is just plain false. The ‘Stimulus’ was passed in February 2009 right after Obama took over the Presidency. He promised to not pass any bills for at least a week to allow for the bills to be read by the people but lied as soon as he was sworn in. The Stimulus was hundreds and hundreds of pages of government handouts to Democrat districts and it was close to $1 million. This was not what America needed and it led to the Tea Party.

Far-left Wikipedia has this to say about the Stimulus:

Note that in his infinite wisdom, NYT economist Paul Krugman is credited with arguing that “the stimulus was far smaller than the economic crisis warranted”. (He also said the markets would crash and burn if President Trump was elected President.)

The data shows that the 12 months after Obama’s stimulus, the US lost 4.3 million jobs:

In Obama’s first three years he netted a loss of 1.5 million jobs compared to President Trump who has added more than 6.7 million jobs.

When it comes to the economy, the billionaire schools the community organizer every time.