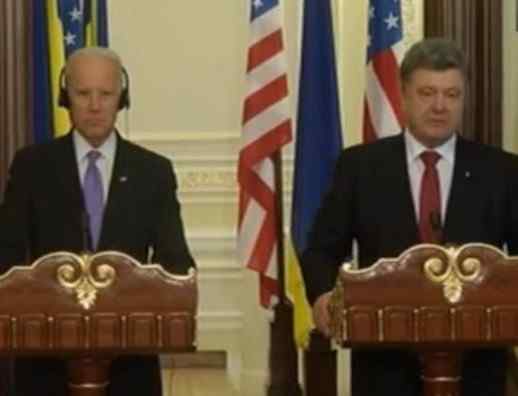 The men discuss the firing of then Prosecutor Shokin for corrupt reasons, in order to prevent an investigation into Biden’s son, Hunter Biden, and other criminal actions.

Joe Biden was US Vice President under Obama.

This presentation with the phone call audio was delivered earlier today in Ukraine.

Creative Destruction Media has the transcript.

Poroshenko: (7:10 mark) I have some good news… Yesterday I went and seat with the general prosecutor’s office.

Joe Biden: (10:20 mark) I am prepared to a public signing for a commitment for a billion dollars. Again I am not suggesting you want it or don’t want it. I am suggesting that is what I am prepared to do. Again it won’t be finalized… Let me when you and I finished speaking let me huddle with my team… I agree with you there is a sense of urgency here.

Joe Biden — (14:30 minute mark from November 2016 call) Congratulations in getting the new Prosecutor General. I know there’s a lot more to that. I really think that’s good. It is going to be critical that he works to repair the damage of Shokin. I’m a man of my word. Now that the new prosecutor general is in place we’re ready to move forward to signing the one billion dollar loan guarantee. And I don’t know how you want to go about that… I’ll leave it to you to how you want it done and where you want it done.

From the audio — Joe Biden tells Poroshenko: We will help you get the vote… Let me ask you one thing before I forget, Privatbank… This is getting very, very close. What I don’t want to have happen. I don’t want Trump to get into *** where he thinks he’s about to buy into a situation… where it is about to collapse where he is going to pour more money into Ukraine… So anything you can do to push the Privatbank to closure so that the IMF loan comes forward I stress this is critical to your economic and national security.

THERE IS MORE COMING!

Do Not Forget — DEMOCRATS IMPEACHED TRUMP OVER THIS!

It looks like now there is audio of Joe Biden caught in a Quid-Pro-Quo!!