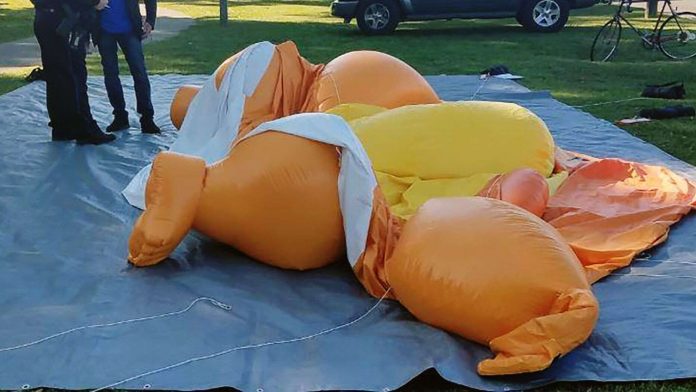 (Gateway Pundit) – The “Baby Trump” balloon which has made an appearance across the pond, made its way to the LSU-Alabama football game on Saturday.

President Trump and First Lady Melania arrived to chants of “USA! USA!” from a packed crowd at Bryant-Denny Stadium for the LSU-Alabama college football game in Tuscaloosa, Alabama Saturday afternoon.

Liberals wanted to troll Trump with the balloon which depicts President Trump as a crying baby wearing a diaper.

On Saturday, a man popped the “Baby Trump” balloon and police came in and arrested him.

“I’m going down here to make a scene, so y’all watch the news,” Hutchinson said in a Facebook live video. “This is pathetic. I’m fixing to get rowdy.”

Liberals raised money online to transport and set up the “Baby Trump” balloon.

Blowing up the balloon in Monnish Park earlier today:

The balloon is “beyond repair” said a witness.

Hoyt Hutchinson popped the “Baby Trump” balloon and was arrested. A GoFundMe was set up for his bail.