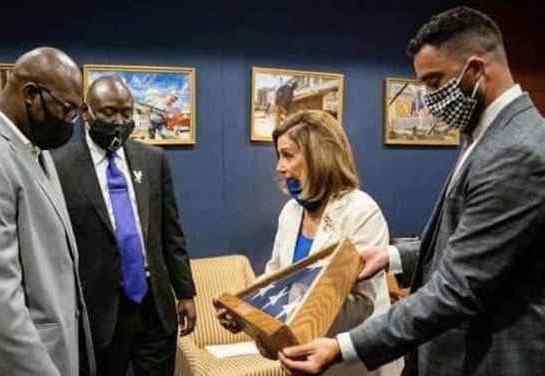 “Congresswoman Pelosi presented Mr. Floyd an American flag flown over the U.S. Capitol – a symbol of our shared commitment to securing justice for George & all victims of police violence,” Pelosi’s official website stated.

Folded American flags are traditionally presented by the U.S. government to families of fallen veterans during military funerals.

The National Cemetery Administration of the Veterans Affairs Department states the specific criteria necessary to receive a folded American flag.

A United States flag is provided, at no cost, to drape the casket or accompany the urn of a deceased Veteran who served honorably in the U. S. Armed Forces. It is furnished to honor the memory of a Veteran’s military service to his or her country. VA will furnish a burial flag for memorialization for an other than dishonorably discharged: 1. Veteran who served during wartime 2. Veteran who died on active duty after May 27, 1941 3. Veteran who served after January 31, 1955 4. Peacetime Veteran who was discharged or released before June 27, 1950 after serving at least one enlistment, or for a disability incurred or aggravated in line of duty 5. Certain persons who served in the organized military forces of the Commonwealth of the Philippines while in service of the U.S. Armed Forces and who died on or after April 25, 1951 6. Certain former members of the Selected Reserves Generally, the flag is given to the next-of-kin, as a keepsake, after its use during the funeral service. When there is no next-of-kin, VA will furnish the flag to a friend making request for it. For those VA national cemeteries with an Avenue of Flags, families of Veterans buried in these national cemeteries may donate the burial flags of their loved ones to be flown on patriotic holidays.

The family of a civilian drug addict who resisted arrest leading up to his death does not fall into the listed criteria of eligible recipients.

Many veterans on social media were insulted and outraged that Pelosi diminished the ultimate sacrifice of fallen soldiers by invoking a military tradition for the Democrats’ race-baiting pandering campaign.

It’s curious Pelosi would choose to gift the American flag to Floyd given Democrats and the left openly denigrate the flag, such as the NFL National Anthem kneeling, and simply attacking people who carry the flag.

Video: Veterans Respond To The Riots In Minnesota