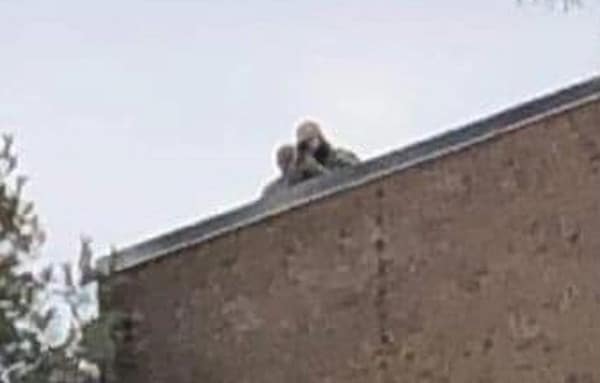 Pelosi was joined by New Jersey Governor, Phil Murphy (D) and Senator Corey Booker (D), all of whom are staunchly against Second Amendment rights, and are known to push for gun control.

The Democrats were met by hundreds of peaceful protestors who filled the sidewalk at Camden County College, demonstrating and holding pro-Second Amendment and pro-Trump signs.

A civilian on the sidewalk snapped this photo, showing a member of the Democrats’ security force, dangerously pointing a firearm at the crowd of civilians. By any standard, this unequivocally violates basic safety rules and calls into question training, and protocol.

William J. Hayden who attended the protest said: “You can clearly see he is pointing the weapon at us. This is why they want complete and total disarmament of the civilian population. And in New Jersey, where the right is diminished, this should be a wake up call to even those that think only the government should have firearms……”

Pointing a rifle at one’s political enemies could be aggravated assault at a minimum, but worse, it bears the hallmarks of tyranny.

New Jersey is one of the most infringed states in the nation. Less than .01 percent of gun owners in the state have carry permits. The standard for carry permits requires the applicant to prove “justifiable need”. Hardly anyone can meet the standard, even those who have been threatened by criminals, and repeatedly kidnapped.

Black Wire Media is the communications division of The Colition of New Jersey Firearms Owners, CNJFO, a 501(c)(3) charitable organization as defined by the Internal Revenue Code can be found on the web at: https://www.cnjfo.com/