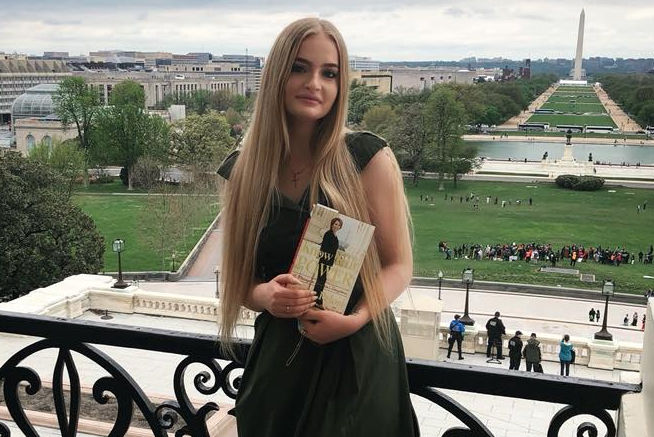 (Gateway Pundit) – Two days ago we reported that Democrat Speaker Nancy Pelosi’s had a Legislative Assistant who was a Ukrainian party girl connecting Pelosi to Ukraine’s government and military. Today we have more connections between Pelosi, the Ukrainian government, the Ukrainian military, Obama’s Ambassador to the Ukraine and Alexandra Chalupa, the woman behind the Russia collusion sham investigation.

The whole story starts with a glamorous party girl from the Ukraine by the name of Ivanna Voronovych. Somehow this young lady lands an Legislative Assistant role for the current Democrat Speaker Nancy Pelosi –

Ivanna has been following Speaker Pelosi for a long time. She often posts pictures and stories of Pelosi on her social media.

Ivanna really likes Democrats and is fond of posting articles of Speaker Pelosi and Representative Adam Schiff, both Democrats from California.

Ms. Voronovych didn’t just get her position working for Pelosi on her good looks. Good looks alone won’t get a Ukrainian girl a post in the US Capital working for the current Speaker of the House. Ms. Voronovych had some help.

One of his most noticeable connections on social media other than his daughter’s ties with Pelosi is with Alexandra Chalupa, the infamous Ukrainian connected to the Russia Hoax.

As we reported in December 2018, Andrii Telizhenko was approached by DNC operative Alexandra Chalupa in early 2016. Chalupa wanted dirt on candidate Trump and his campaign manager Paul Manafort. The Ukrainian embassy in Washington DC worked CLOSELY with the DNC operative Chalupa.

Chalupa told Andrii she wanted Russian “dirt” on the Trump campaign. The Gateway Pundit spoke with Telizhenko on the DNC Russia-gate Scandal –

Alexandra Chalupa was apparently hired by the DNC going as far back as 2013. According to Politico:

A daughter of Ukrainian immigrants who maintains strong ties to the Ukrainian-American diaspora and the U.S. Embassy in Ukraine, Chalupa, a lawyer by training, in 2014 was doing pro bono work for another client interested in the Ukrainian crisis and began researching Manafort’s role in Yanukovych’s rise, as well as his ties to the pro-Russian oligarchs who funded Yanukovych’s political party.”

Politico also noted that Chalupa claimed that in October of 2015 she began investigating Trump’s ties to Russia. Why she began this investigation is completely unknown. Trump NEVER had any ties with Russians. The only thing of significance that had happened at this point was that Trump announced he was running for office. There was no apparent triggering event. Candidate Trump had very limited contact with Russia or Russia businessmen.

Also, according to Politico, in January of 2016, Chalupa suddenly and out of the blue warned the DNC about Paul Manafort. Manafort’s name hadn’t even been mentioned at this point in time. Chalupa made a prediction that if Team Trump hired Paul Manafort that it would be clear and convincing evidence that Trump had ties to Russia.

Manafort worked with Hillary’s Campaign Manager John Podesta and his brother Tony in the Ukraine. They worked to bring in US politicians to meet with Ukranian politicians.

Ivanna’s father, Roman Voronovych, is not only connected to Chalupa, he also has ties to Obama’s corrupt US Ambassador to the Ukraine, Marie Yovanovitch.

“The former ambassador from the United States, the woman, was bad news and the people she was dealing with in the Ukraine were bad news so I just want to let you know that,” Donald Trump told Volodymyr Zelensky in a July 25 call, according to a White House transcript released Wednesday.

All these ties and too little time to discuss –

Speaker Pelosi is no innocent bystander in the latest hoax to remove President Trump from office, the Ukraine Hoax. Pelosi is a card carrying member of ‘impeach Trump’ and no doubt has been planning the latest hoax for some time.