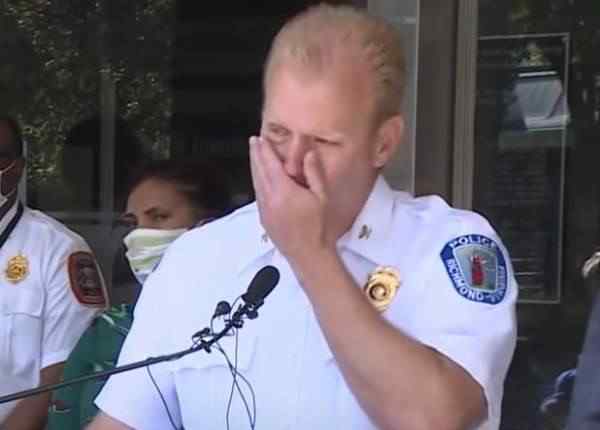 (Gateway Pundit) – The chief of the Richmond, Virginia, police department told reporters Sunday that Black Lives Matter and antifa rioters set fire to a multi-family home with children inside and then blocking access for firefighters to get through to save the children.

Richmond Police Chief William Smith broke down while speaking about the horrible burning deaths of a children after their occupied building was torched by rioters.

The chief of the Richmond, Virginia, police department said Sunday that rioters set fire to a multi-family home with a child inside while blocking access for firefighters to get through to save the child.

Richmond Police Chief William Smith: “One incident that is particularly poignant, that truly illustrates the seriousness of the issues we’re facing. Last night protesters intentionally set fire to an occupied building on [West] Broad Street. This is not the only occupied building that has been set fire to in the last two days. But they prohibited us from getting on the scene. We had to force our way to make a clear path for the fire department. The protesters intercepted the fire apparatus several blocks away with vehicles and blocked that fire department’s access to the structure fire. Inside that home was a child.”

The chief of the Richmond, Virginia, police department broke down while describing the horrific event in his city.

Don’t expect the mainstream media to carry this story.

For the record, police on the scene were able to save the children.