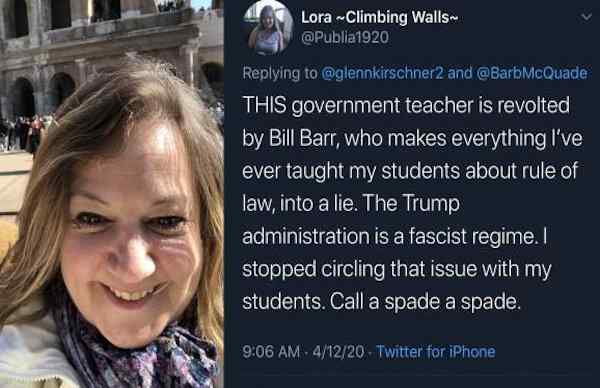 (Gateway Pundit) – A California public school teacher has bragged on social media that she is indoctrinating her students by teaching them that President Donald Trump is a “fascist,” compares the administration to death cult leader Jim Jones in lesson plans, and trashes her Republican students on social media.

The unhinged teacher also compared the 2016 election results to the deadly 2001 terrorist attacks on the World Trade Center.

Lora Yorch is a government and economics teacher at California High School, which is part of the Whittier Union High Schools. She tweeted earlier this month that “the Trump administration is a fascist regime. I stopped circling that issue with my students. Call a spade a spade,” admitting to politically indoctrinating her students.

Her multiple Twitter accounts reveal a deep obsession with hating the president, admitting that she has told her students not to enlist in the military until Trump is out of office because they will “die to line his pockets.”

In a tweet from November 4, 2018, Yorch admits she stopped presenting both sides in class and tells Trump supporters that they are wrong for their political beliefs.

“I committed to telling my students the truth instead of telling ‘both sides.’ On Friday, I told a Trump supporting student that his ‘facts’ are untrue. He corrects objective FACTS with propaganda and I won’t give that equal weight. This is a tough time to teach Government,” Yorch tweeted with a sad face emoji.

The high school teacher doesn’t stop at just telling them that they are wrong, she also repeatedly trashes her pro-Trump students — even comparing them to maggots.

Last year, Yorch wrote about her Trump supporting students referring to them as “MAGAts,” the resistance meme playing on the word “maggot.”

Yorch frequently talks about her “hispanic students” as if they are idiots who just don’t understand how badly Trump will “hurt” them.

“I’m fortunate that only about two of my students have Trump supporting families per class (poor Hispanic kids, Los Angeles County, CA), but can tell you, universally the BIGGEST jerk in the class (with a failing grade) will DEFEND anything Trump does. ANYTHING,” Yorch tweeted in 2019.

It is unclear if the student is failing because they deserve to be, or if Yorch is failing them because she disagrees with their political views.

Yorch has claimed multiple times that she uses lesson plans about the deadly Jonestown cult to compare President Trump and Fox News to the cult leader who lead 909 people to commit a mass murder/suicide in 1978.

If comparing the president to a death cult leader wasn’t insane enough, Yorch also compared his election win to 9/11.

“Just said to my HS students that Trump is the 9/11 level scandal they’ll tell their grandchildren about,” Yorch tweeted in 2017 with the hashtag “#TrumpRussia.”

The tweets aren’t just random moments of frustration. Her entire account is a shrine to her admissions of indoctrination.

The high school teacher also claimed she “took a knee” in protest with students following the election.

Yorch has repeatedly tweeted an anecdote about a student who asked her why nobody has assassinated the president. She said that she understood why some people “might not want him to live a long life.”

Yorch frequently brags about her taxpayer-funded inflated salary, making $140,000 in 2017 between her total pay and benefits. She has referred to herself as a “way overpaid teacher” on Twitter.

“The high salary itself isn’t the problem. The problem is that taxpayers are forced to pay large amounts of money for the political indoctrination of their own kids. This wouldn’t be an issue if we had school choice since families could pull their children – and their education dollars – away from bad actors,” Reason Foundation Director of School Choice Corey DeAngelis told the Gateway Pundit.

An additional Twitter account belonging to Yorch uses her real name, links to her school district, and follows the same extreme anti-Trump themes as her semi-anonymous account.

The Gateway Pundit has reached out to officials in the Whittier Union High School district and California High School and will update this story if a comment is provided.