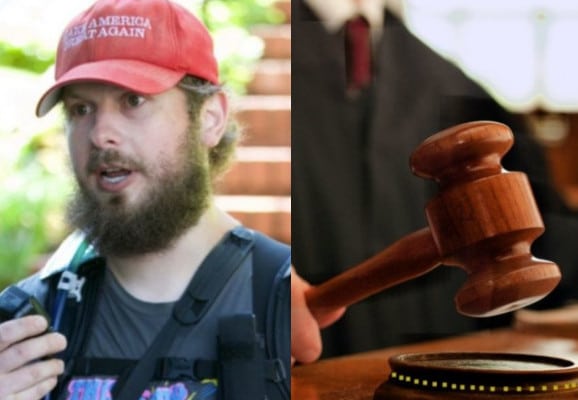 His 2nd Amendment rights have been effectively revoked.

(Big League Politics) – Shane Michael Kohfield, a 32-year-old Marine targeted under Oregon’s red flag laws, will not be receiving his confiscated firearms back any time soon, a circuit court judge has determined.

“I do find, by clear and convincing evidence, that you do present a risk of causing physical injury or harm to you or another person in the immediate or near future,” Circuit Judge Katherine Weber said.

Kohfield was robbed of his firearms on Aug. 7 after a Portland area’s FBI Joint Terrorism Task Force initiated an “extreme risk protection order” shortly after he protested outside of Mayor Ted Wheeler’s home. Wheeler has gained national infamy after allowing ANTIFA domestic terrorists to run the streets of Portland during many protests throughout the summer.

The order was issued to protect ANTIFA terrorists after Kohfield made it clear that he would not hesitate to defend himself against the group if they targeted him and his fellow conservatives. He gave the speech while wearing a “Make America Great Again” baseball cap while showing his concealed weapons permit.

Kohfield apparently got on the FBI’s radar after being ratted out by Rep. Dan Crenshaw (R-TX), one of the biggest proponents of red flag laws in Congress. He had sent a letter to Crenshaw alerting him of the ANTIFA threat, and Crenshaw’s office showed the letter to the FBI so the former Marine could be profiled and eventually have his firearms seized.

The feds defend their decision to revoke this veteran’s gun rights, as they claim his extremist rhetoric against ANTIFA revokes his freedom under 2nd Amendment.

Big League Politics reported in August about how Kohfield was victimized by Oregon’s red flag laws:

A Trump supporter in Oregon was stripped of his firearms under the state’s red flag laws for declaring that his rights wouldn’t be trampled upon by ANTIFA terrorists who have rampaged throughout Portland during the summer.

“If ANTIFA gets to the point where they start killing us, I’m going to kill them next,” said Shane Kohfield, a 32-year-old former Marine. “I’d slaughter them and I have a detailed plan on how I would wipe out ANTIFA.”

This statement triggered the FBI’s Joint Terrorism Task to revoke Kohfield’s 2nd Amendment rights and take his firearms away. In addition, they forced the former marine to spend 20 days in a veterans’ hospital as well.

Law enforcement admits that Kohfield never committed any criminal actions or charged with any crimes, but that didn’t prevent his rights from being stripped from him anyway.

The feds, who refuse to prosecute deep state cretins like James Comey but devote excessive resources to profiling and demonizing gun owners, are patting themselves on the back for targeting this veteran with pre-crime measures.

“Clearly, this latest incident shows how effective proactive policing can be in reducing the chance of violence,” retired FBI agent Michael German said. “It also makes you wonder if they’d been proactive from beginning whether all of this would have grown into the menace it has become.”

“The Portland JTTF’s role is to assess, address, and mitigate any given threat against the people of Oregon appropriately,” wrote Beth Anne Steele, a spokeswoman for the FBI’s Portland office in an email.

“Sometimes that mitigation takes the form of criminal prosecution, and sometimes it involves a holistic response, including consultation with threat assessment teams or others to divert a person before a significant violent crime occurs,” Steele added.

Kohfield, who fought two tours of duty in Iraq and suffers from post-traumatic stress disorder as a result of serving his country, felt he was responding to a domestic threat posed by ANTIFA that is being aided and abetted by Portland Mayor Ted Wheeler. He participated in a protest outside of Wheeler’s house in July.

“I was watching on the news that city of Portland did nothing to protect the people against ANTIFA,” Kohfield said. “I figured I’d show up to protect these people.”

Despite the setback, Kohfield vows to keep fighting for his rights.

“This is still a win to me,” Kohfield said. “Everything I did was to protect my country. And to avoid violence.”

However, he may never be able to get his firearm rights back legally. The protection order filed against him can last for a year, but then be extended indefinitely. The man who put his life on the line to protect the Constitution has been betrayed by the State.