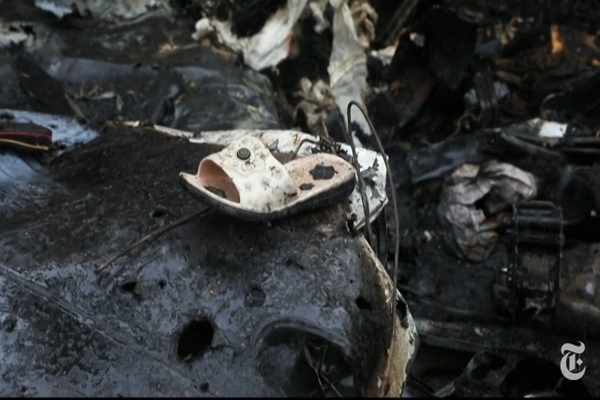 The Biden regime’s drone strike last month that they claimed killed “ISIS-K” terrorists who helped organize the suicide bombing attack at Kabul Airport actually killed an innocent US NGO aid worker, 7 children and 2 others, according to an investigation from the New York Times.

Woke Gen. Mark Milley, who was apparently too busy studying “white rage” to find the real organizers of the attack, said last week that it was a “righteous strike.”

Family members who witnessed the explosion said that Mr. Ahmadi and several of the children were killed inside his car; others were fatally wounded in rooms alongside the courtyard. The family’s SUV, parked next to the Corolla in the tight confines of the courtyard, was set on fire, while smoke filled the house.

Ms. Ahmadi, the driver’s daughter, staggered outside, choking, and saw the dismembered bodies of her siblings and relatives. “I saw the whole scene,” she said.

An Afghan health official confirmed that local hospitals received several bodies transferred by ambulance from the house, including those of three children. Later on Monday afternoon, a funeral was held in Kabul with the victims’ 10 coffins, several of them closed because the bodies were so disfigured.

Among the victims was her cousin and fiancé, Ahmad Naser, 30, a former army officer and contractor with the U.S. military who had come from Herat, in western Afghanistan, in hopes of being evacuated from Kabul.

[…] “How was he ISIS? Look at this,” said Najib, a cousin of Mr. Ahmadi who would give only his first name for fear of retribution, angrily dismissing the U.S. military’s account of the attack. “They lied about us in the media.”

Neither Mr. Ahmadi nor any of his family members were connected to ISIS or any other terrorist group, they said, adding that many in the family had worked for the Afghan security forces.

[…] “Zemari was my brother, but he was like my father,” said Emal Ahmadi, whose 2-year-old daughter Malika was killed in the strike. He said that Mr. Ahmadi was the breadwinner for the families of all four brothers. “I’m jobless, but he supported me.”

At a house nearby, a group of female relatives of the victims had gathered, some standing in bewilderment, others wailing aloud. Anissa Ahmadi, Zemari Ahmadi’s wife, who lost four of her children in the explosion in addition to her husband, sat in a state of shock, unable to speak above a whisper. Her daughter Samia, beside her, gave voice to the grief and anger many felt.

“America used us to defend itself, and now they’ve destroyed Afghanistan,” she said. “Whoever dropped this bomb on our family, may God punish you.”
Sorry, ma’am.

Biden had to make someone “pay.”