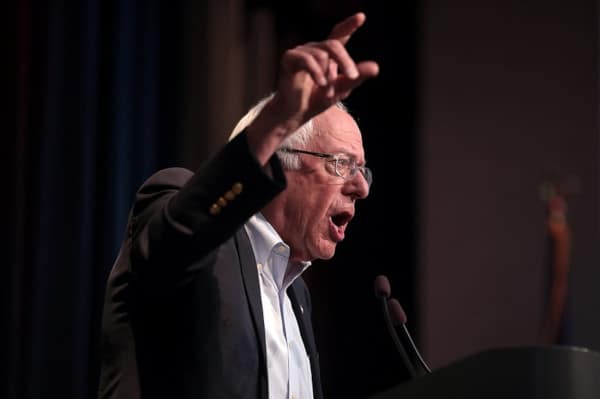 (Gateway Pundit) – Sen. Bernie Sanders, the Democratic socialist from Vermont who is now the frontrunner for the 2020 presidential nomination, released a new plan Monday to give away $1.5 trillion in taxpayer cash.

Under the plan, Sanders plans to provide universal child care and pre-K, spending $1.5 trillion over a decade for the “free” program. All Americans would guaranteed child care through age 3 followed by free pre-kindergarten education.

“As president, we will guarantee free, universal childcare and pre-kindergarten to every child in America to help level the playing field, create new and good jobs, and enable parents to more easily balance the demands of work and home,” Sanders said in a statement.

Sanders says he would fund the program through his “tax on extreme wealth” over $32 million. His campaign claims that tax would bring in some $4.3 trillion over 10 years.

The socialist has a slew of “free” programs that cost trillions. He supports a single-payer “Medicare for All” system, wants to cancel all student debt and make public college free, and raise the minimum wage to $15 per hour. And Sanders advocates providing free breakfast, lunch and dinner to all students, regardless of income level.

“Exact cost projections on all of Sanders’ proposals aren’t available, in part because he hasn’t fully fleshed out some of the ideas he’s embraced (such as universal pre-K and child care),” CNN reported in January.

But a wide variety of estimates put the likely cost of the single-payer health care plan he has endorsed around $30 trillion or more over the next decade. Depending on the estimates used, including projections from his own campaign, the other elements of the Sanders agenda — ranging from his “Green New Deal” to the cancellation of all student debt to a guaranteed federal jobs program that has received almost no scrutiny — could cost about as much, or even more than, the single-payer plan. That would potentially bring his 10-year total for new spending to around $60 trillion, or more. … “I think if the price tag for the Sanders agenda was [better] known … voters would blanch — even Democratic primary voters would blanch,” said Jim Kessler, executive vice president for policy at Third Way, a centrist Democratic group. “The truth of the matter is in primary elections both in 2016 and so far in this one, he’s allowed to skate. He gets graded on a curve. But if he were the nominee, the curve is over. The Republicans will spend a billion dollars picking apart every one of his plans.” …

The sheer size of Sanders’ spending agenda dwarfs the proposed tax increases he has offered to pay for it, economists across the ideological spectrum agree. Brian Riedl, a former Senate Republican budget aide who’s now a senior fellow at the conservative Manhattan Institute, has calculated that at most Sanders’ existing proposals to raise taxes on the wealthy, Wall Street and corporations would raise about $23 trillion over the next decade. “There is nowhere near enough resources that you can credibly collect to pay for spending of this size [from the rich],” agrees MacGuineas. “When you are talking about a doubling in the size of the government, you are talking about significant tax increases on the middle class.”

In addition, Sanders supports a plan offered by Rep. Alexandria Ocasio-Cortez she has dubbed the “Green New Deal.” The cost for that program: $93 trillion.