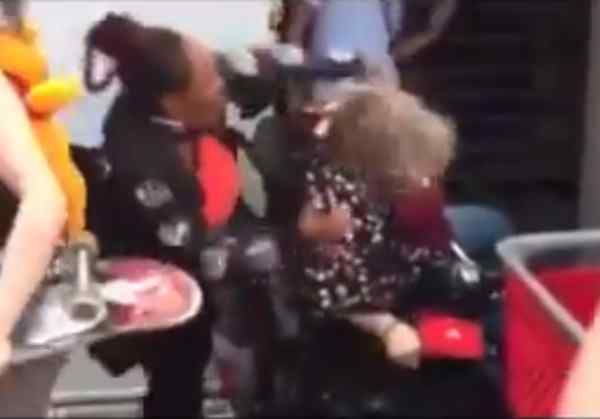 (Gateway Pundit) – Savage animals looting a Minneapolis Target during a riot over “police brutality” attacked a white woman in a wheelchair on Wednesday evening.

The brave woman was attempting to block the door to stop the looting — more than the police were actually doing.

After being violently assaulted by one of the feral looters, she was sprayed with a fire extinguisher for an extended amount of time.

Some at the scene have claimed that she “stabbed people” after the initial attack.

The woman was checked out by EMT’s who told her to go home. She described being repeatedly hit from the behind, hit in the face, maced and robbed.

The looters and rioters caused violence and chaos throughout the city over what they believe to be a case of brutality in the death of George Floyd while in police custody.

The looters also have reportedly set fire to the Minneapolis City Library, a building they are unlikely to have ever stepped foot in.

The riot is currently ongoing.