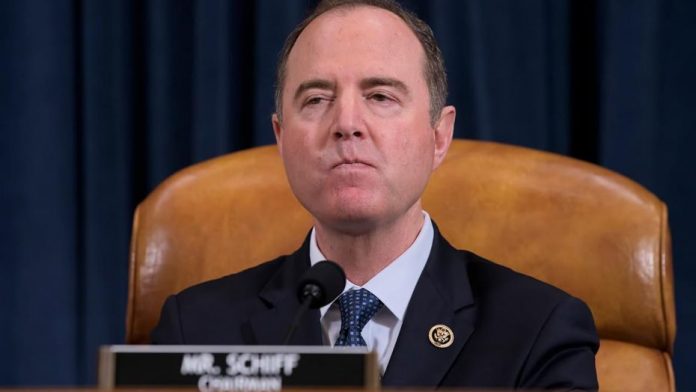 (Gateway Pundit) – Lead House Manager Rep. Adam Schiff (D-CA) angered Republican senators at the Trump impeachment trial Friday night by citing a CBS News report claiming an anonymous Trump “confidant” had said any GOP senators who voted against Trump would have their heads on pikes. There were audible grumblings and cries of “not true” heard by reporters in the gallery. Schiff managed to alienate Sen. Lisa Murkowski (R-AK), one of the few Republicans whom Democrats and the media believe are persuadable on impeachment.

“Murkowski is PISSED “He was going fine with moral courage until he got to head on a pike. That’s where he lost me”.

Schiff made the comments during the finale of the Democrat Managers’ three day presentation of their case to convict and remove President Trump from office on charges of abuse of power and obstruction of Congress. Schiff and his fellow House and Senate Democrats are frustrated that Republicans, who control the Senate with a 53 seat majority, are not supporting their efforts to open the trial to new witnesses and evidence.

Original CBS report from Thursday night by Nancy Cordes: “In opening statements, House managers examined the debunked conspiracy theories invoked by Pres. Trump. A @POTUS confidant tells CBS News that GOP senators were warned: “vote against the president & your head will be on a pike.”

Video of Schiff citing the report during his closing statement Friday night:

“Republicans are VERY angry about Schiff’s decision to reference that CBS “head on a pike” report. Murkowski says “that’s where he lost me.” Barrasso says “whatever gains he may have made, he lost all of it — plus some — tonight.”

“That’s not true,” Susan Collins said several times on the floor, shaking her head when Schiff cited a news report saying WH warned senators that a vote against Trump means “your head will be on a pike.” Risch also said aloud: “That’s not true.” Cotton laughed when Schiff said it”

“Inside the chamber, GOP senators grumbled and shook their heads ‘no’ when @RepAdamSchiff mentioned this head on a pike report. @SenatorCollins said loudly at Schiff: “not true!”

“GOP OK Sen Lankford on Schiff’s ‘head on a pike’ comment: I was visibly upset with it. The whole room was visibly upset on our side..that’s insulting and demeaning to everyone to say that we somehow live in fear and that the President has threatened all of us”

“ERNST on Schiff mentioning ‘head on a pike’: “I was listening, until he got to the part where he just completely made a bunch of bullcrap up…Ohhhh, a confidant of the president told me that heads are gonna roll if you don’t hang together. That’s baloney.”

“From colleague Jason Donner. Sen. Lisa Murkowski on Schiff’s ‘head on pike’ comments “It was unnecessary” & Sen. John Barrasso “No republican senator has been told that.” Murkowksi: “He was doing fine with moral courage until he got on the head on the pike.”

UPDATE: Collins issues statement, “New COLLINS stmt on Schiff mentioning “head on a pike” report: “Not only have I never heard the ‘head on the pike’ line but also I know of no Republican Senator who has been threatened in any way by anyone in the Administration.”

“3. “Head on a pike”. When Schiff quoted CBS story about Trump warning sen’s their head wld be on pike if voted against POTUS. Effect: Offended 1/2 the audience. Saw Sens Lankford, Cotton, Sasse, Ernst + Loffler(!) say outloud variations of ‘not true!”. Audible groans from many.”

“Witnessed this in real time. A number of Republican senators looked visibly angry and whispered to each other right after Rep Schiff cited a CBS report that Republicans’ heads would be on a “pike” if they voted to remove President Trump.”