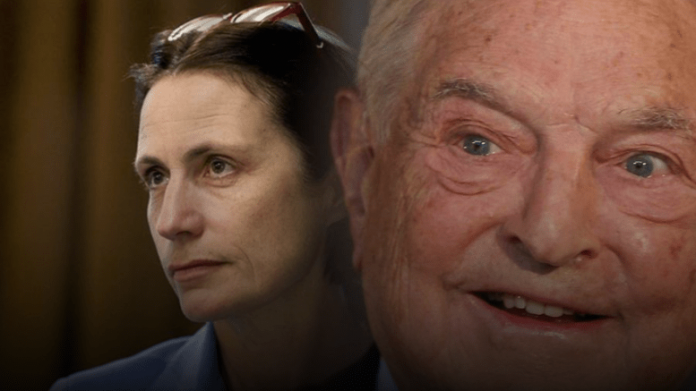 The list of her connections to corrupt players in the Deep State is long and wide.

As reported earlier by Joe Hoft –

As we previously mentioned Roger Stone outed Fiona Hill in 2017 as a Deep State spy in the White House under then NSA Advisor General H. R. McMaster.

The George Soros connected traitor was outed by Israeli spies as was reported by Stone at InfoWars.

InfoWars reported on Hill and suggested she may be one of the current deep state anti-Trump “whistleblowers.”

The second White House whistleblower in the Democrats’ Ukraine witch hunt is none other than George Soros operative Fiona Hill, Infowars has learned. Infowars was contacted by sources close to the president confirming our suspicions that Fiona Hill is definitely one of the so-called White House whistleblowers involved in the current Ukraine witch hunt against President Trump. Infowars first reported that Hill worked as a mole for Soros when Trump confidante Roger Stone broke the bombshell in May 2017, revealing that Hill was serving as Soros’ mole under the supervision of former NSA adviser H.R. McMaster. The video below shows Trump confidante Roger Stone in July 2017 warning that he was told he would be “targeted for annihilation” by the FBI for exposing the mole. Stone was raided by the FBI and arrested in January.

This video was prophetic – simply amazing!

Adam Schiff and the Democrats needed Hill to speak for 11 hours in a recent Deep State interview. Hill had ZERO knowledge of the call President Trump had with the Ukrainian President, and only heard rumors. Democrats don’t care. They want to impeach Trump on rumors.

What a clown show. According to reports Ms. Hill was not even working in the White House at the time of the call with the Ukrainian president on July 25th. Hill resigned before the call.

According to her resume Fiona Hill worked for the George Soros Open Society Institute from 2000-2006, just 13 years ago.

Hill has connections to Christopher Steele (who is suspected of being a source for Hill’s Vox article). According to people familiar with their relationship, the two British Russia hands are not exactly friends. But they have known each other for years, beginning when Hill was working on Russia at the National Intelligence Council and Steele was on MI6’s Russia desk. “She had a high opinion of Steele, and thought he was very smart,” a foreign policy veteran, and one of Hill’s close friends, told POLITICO. Hill spoke to Steele in 2016 and discussed him with friends in 2017, after BuzzFeed published his memos outlining a potential conspiracy between the Trump campaign and Russia to win the election.

Hill also has past connections to Adam Schiff. Fiona Hill was a speaker, for example, at the Aspen Institute Security Forum in July 2017, an event for which Adam Schiff, now taking her testimony in a closed-door hearing, was also a speaker. This is a pattern with Schiff, given his Aspen participation in July 2018 and meeting with Glenn Simpson of Fusion GPS and dossier fame, who was also in attendance.

Hill also has connections to Professor Joseph Mifsud, the Maltese professor at the center of the storm with George Papadopoulos. Hill has attended the conferences of the Russian Valdai Club, like Spygate principal Joseph Mifsud and his Russian contact Ivan Timofeev. She has done this under the auspices of the Brookings Institution, with which she has been affiliated as a senior fellow and program director for many years.

Hill also has deep ties to Clinton crony, Strobe Talbott (who was a recipient of the Cody Shearer dossier that later became a part of the Steele dossier): Her work at Brookings, where she has stood alongside author collaborator Clifford Gaddy as resident Russia expert since 2009, was under the leadership of long-time Clinton intimate Strobe Talbott, who headed the Institution until 2017.

For some strange reason, Fiona Hill could not remember the Eric Ciaramella’s name during testimony.

It was almost like she was afraid of mentioning his name even though she worked with him on Ukrainian policy.

When former National Security Council official Fiona Hill testifed before the House Intelligence Committee, she said that she could not remember the name of the Ukraine director when she joined the White House. That person was Eric Ciaramella, the career CIA analyst who is alleged to be the Ukraine whistleblower. Hill was White House NSC senior director for European and Russian affairs, a position Ciaramella held in an acting capacity while still Ukraine director, for a brief period immediately before she took the post. Ciaramella, 33, is now a deputy national intelligence officer for Russia and Eurasia on the National Intelligence Council under President Trump’s director of national intelligence, the Washington Examiner previously reported.

This woman should never be allowed in government office ever again. She’s a crooked Soros connected traitor. Period.