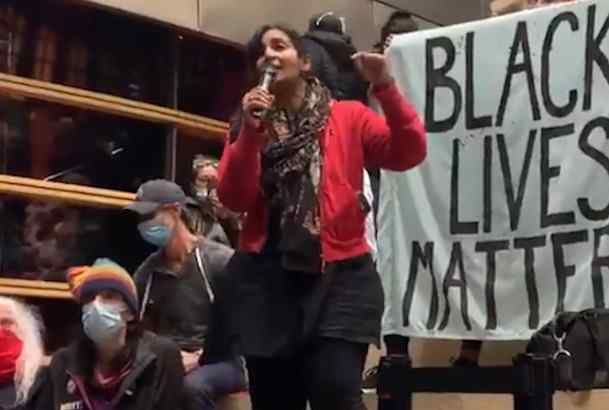 (Gateway Pundit) – Protesters and rioters have been allowed into Seattle’s City Hall after Councilwoman Kshama Sawant used her key to unlock the building and allow them inside.

Sawant has been calling on Mayor Jenny Durkan to resign over “violence and brutality” by police in the city’s response to the “overwhelmingly peaceful” riots they have seen in response to the death of George Floyd in Minneapolis.

Protesters poured into the building chanting for the mayor’s removal and were met with a speaker from the Socialist Alternative party.

Sawant herself also spoke to the mob, calling her colleagues “sellouts” and “corporate politicians.”

In a press release last week, Sawant said that the mayor “has repeatedly unleashed Seattle police to use ever-escalating violence against ordinary people protesting the police murders of George Floyd, Breonna Taylor and so many other black and brown people.”

“The police have inflicted tear gas, mace, rubber bullets, flash-bang grenades, curfews, arrests and other repressive tactics on Seattle activists and residents — including children — in an attempt to bully and silence the protest movement,” she added.

In a shocking video from Seattle’s riots last week, a man was seen attempting to take an AR-15 from a police vehicle.

There have been multiple injuries to both rioters and police in the city over the last couple of weeks.