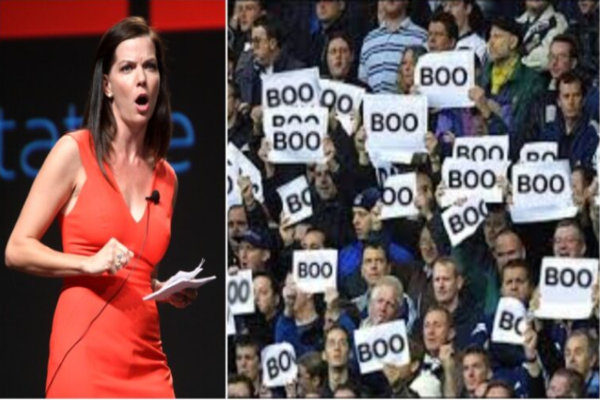 (bigleaguepolitics) – Arizona state senator Michelle Urgenti-Rita was booed off the stage during Turning Point’s Rally to Protect Our Elections on Saturday.

Big League Politics reported on how Turning Point invited Urgenti-Rita to the conference despite the fact that she had recently killed a crucial election reform bill in the state senate. She is currently running for secretary of state.

“Why don’t you listen to what I have to say?” Urgenti-Rita asked as the crowd turned on her, booing so loud that her voice was practically inaudible.

The crowd refused to issue sympathy to this brazen RINO, and she eventually showed her true colors and became contentious with the audience.

“It’s we the people who are empowered by our founding… Listen, I…I am running to be your next secretary of state. I am going to win the primary. Thank you very much,” she said arrogantly as the crowd refused to let her spew her empty platitudes.

The clip can be seen here:

Urgenti-Rita is running for secretary of state against state representative Mark Finchem, who has been a major proponent of the forensic audit. He appeared on BLP Live earlier this year to explain his comprehensive plan for reforming elections:

“Arizona state Representative Mark Finchem (R-Oro Valley) is running for secretary of state, and he recently shared his thoughts on how he could reform the election process in that position and in a state suffering a crisis of confidence in elections.

“There are a couple things we have on the radar. One of those is a ballot fraud security countermeasures process that would put a UV-light activated watermark onto ballots. In doing that, we are able to serialize the sheets of paper so that we know what is the defined universe of ballots that are in the system, of ballots that have been issued that are available,” Finchem told Big League Politics Live.

“If we are able to put a watermark and a serialization onto the paper, that means we can account for the number of ballots. Now, of course, that would not be tied to the voters so we would still have an anonymous voting system,” he added.

Finchem also wants to make sure that voters can verify if their ballots have been counted and personally make sure their ballots have not been intercepted by a third party. He does not call for an end to mail-in voting entirely but believes that additional security measures can be implemented to secure the process.

“There are a lot of people calling to end the mail ballot system. That’s been run in Arizona here for 20 years. I think that’s probably here to stay, but I do have a problem with electronic equipment counting ballots that appears to be calculating as opposed to tabulating,” Finchem said.

He said that much of his policy still hinges upon the results of the ongoing Maricopa County audit of ballots and counting machines. Finchem says he has received death threats and endured other harassment since announcing his run for secretary of state.

“I’m under attack daily and in some of the most vile ways. People have put out fake ads on Craig’s List that I’ve got a free canoe, come pick it up. I got over 150 texts last night,” Finchem said of the harassment he has received from deranged liberals.

“And then, of course, the fake news media. We’ve got organizations like the Arizona Republic, which used to be a great newspaper. It’s now nothing more than a propaganda rag. You’ve got op/ed guys, like the Arizona Daily Star. They’re writing stories as though they’re news stories when they’re little more than supposition and an opinion piece,” he continued.

“So they’re not grounded in fact. They take a little piece of truth and then expand on what their belief is. So, if anyone is creating fake news and conspiracy theories, it’s the Left, but then again, that’s what Saul Alinsky taught them all to do. If you don’t like the message, marginalize the messenger, and I don’t think that’s going to work here,” Finchem added.“

The RINOs are realizing that they can no longer pull the wool over the eyes of their constituents. Urgenti-Rita found out the hard way with her disgraceful showing at the Turning Point conference. What makes it even worse for her is that President Trump saw just how unpopular she is. Urgenti-Rita would resign in disgrace immediately if she had any shame.