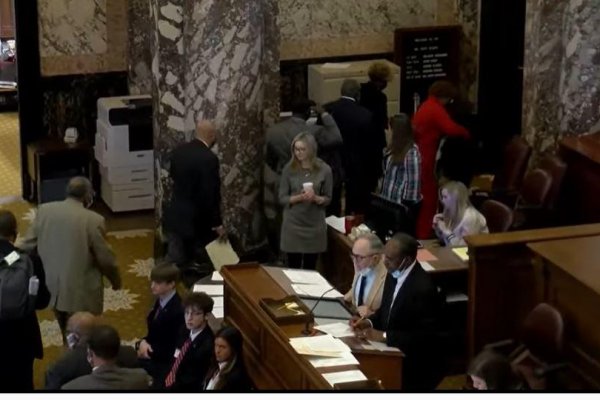 (breitbart) – All 14 black Democrat senators walked out of the Mississippi Senate Chamber on Friday in protest before a vote on a bill that prohibits teaching children any race is superior or inferior to another.

Senate Bill 2113 passed by a margin of 32-2 after the walk out of the black caucus, which Daily Mail reports was entirely comprised of Democrats. The two senators who voted against the legislation were David Blount and Hob Bryan – both of whom are white Democrats, according to WLBT. The bill will now make its way to the state’s House.

The proposed legislation states in part:

(1) No public institution of higher learning, community/junior college, school district or public school, including public charter schools, shall direct or otherwise compel students to personally affirm, adopt or adhere to any of the following tenants:

(a) That any sex, race, ethnicity, religion or national origin is inherently superior or inferior; or

(b) That individuals should be adversely treated on the basis of their sex, race, ethnicity, religion or national origin.

Prior to the walkout, Senate Minority Leader Derrick Simmons (D) questioned Sen. Michael McLendon (R), who introduced the bill. McLendon submitted he had not heard of an instance where Critical Race Theory was being taught in Mississippi but noted a large number of his constituents expressed concerns “over the teachings that they have heard from around the country.”

“Well, we try to make laws for the future as well as today,” McLendon said towards the beginning of the exchange.

Simmons questioned McLendon about what the bill would mean for teachings of race and racism in schools going forward should it be signed into law.

A transcript of the exchange reads in part:

Simmons: Should we teach race and racism in our schools accurately?

McLendon: I believe we’re doing that and this bill is not changing anything about our past. All this bill says – no child should be told that they’re superior or inferior to another. That’s all this bill does.

Simmons: So all the history in the state of Mississippi all the way up to the changing of the state flag – all of that can still be taught in our schools with the passage of this bill?

Simmons: And how we got to the point we got to in 2020 when we changed the flag – we can also teach the true history about that in our schools if this bill becomes law?

McLendon: That is my intent, yes sir. All this bill does is no child is superior or inferior to another and we should not teach that – that someone is.

Simmons: The horrific thing that happened to Mamie Till’s son – can we teach that in our schools with the passage of this bill?

McLendon: Absolutely, I watched the movie last night as a matter of fact.

Later in the session, Simmons requested a roll call before leading a walkout of black senators, according to WLBT.

“We felt like it was a bill that was not deserving of our vote,” said  Simmons, according to Mississippi Today. “We have so many issues in the state that need to be addressed. We did not need to spend time on this.

“We walked out as a means to show a visible protest to these proceedings,” said Democrat Sen. John Horhn.

Simmons released a statement that reads in part:

Senate Democrats have always led the charge on teacher pay raises and have championed establishment of fair career plans that show our appreciation for the job our teachers do. However, the roll call vote today to pass Senate Bill 2444 – our teacher pay plan – was quickly called up and passed without discussion immediately after members of our caucus walked out in protest of a vague bill that would ban “critical race theory” in Mississippi’s public schools and universities without creating boundaries. We felt it was unfair to have such a bill introduced or passed as it really demeans a large segment of our population. Though our votes were not counted because of the chain of events, Senate Democrats stand in support of raises for our educators.

“I’m trying to find the mischief in this bill and I don’t see it,” said Republican Sen. Chris McDaniel.

“He argued that if the bill was introduced in the 1950s, it would have been the ‘most dynamic piece of civil rights legislation in this state’s history,’” WLBT reports.