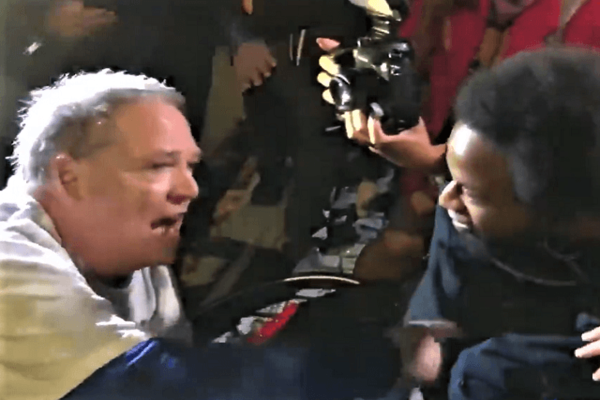 (breitbart) – Antifa and BLM wasted no time in accosting women, children, families, and the elderly as they walked down Washington, DC, streets after the Million MAGA March on Saturday. Protesters threw large fireworks and projectiles at restaurant-goers eating outside and flashed laser lights into hotel rooms.

DC Metropolitan Police blocked off BLM Plaza so Million MAGA March attendees could not go through. Trump supporters had to walk through a gauntlet of BLM, Antifa, and black bloc assailants in order to leave the area.

A black woman hauled off and sucker-punched a man carrying a Trump flag.

Rioters walked down the street and harassed an elderly couple while trying to rip a Trump flag out of their hands.

They threatened and harassed an elderly man walking down the street with a scooter. They pushed the scooter down and threw unidentified liquids at him.

Protesters attacked a middle-aged woman walking with other women and some Trump supporters. A black woman hit the woman in the back of the head.

A black mother with her young children wearing a Blue Lives matter hat and a Trump jacket frantically told police officers she wanted to press charges against her assailants. The assailants cornered her and asked her why she had her children there. She was pushing a child in a stroller and shielding her pre-teen daughter when she was attacked, reported Breitbart News.

Children walking down the street with their family were frightened by the mob and were crying.

BLM and Antifa assaulted, threw eggs and liquids at a young couple trying to walk through the BLM Plaza. The female cried out in fear.

Breitbart News reported that protestors stomped on an older man’s head after the rally. A black man ran up behind the Trump supporter and bushwacked him making him fall to the ground.

Antifa beat another man about the head and body with a flag pole.

As restaurant-goers were dining outside, Antifa and BLM threw large fireworks and projectiles at them.

They gathered outside of hotels where Trump supporters were staying.

One BLM protester hassled a woman wearing a red MAGA hat and kept calling her a b**ch.

A horde of BLM and anti-fascists shone lights and lasers into hotel rooms of The Capital Hilton hotel. They were stopped from rushing into the lobby.

BLM and Antifa rioters clashed with peace officers outside The Capital Hilton. They were reported to have been pushed back with pepper spray.

Lana Shadwick is a writer and legal analyst for Breitbart News. She is a trial lawyer who previously served as a prosecutor and family court associate judge in Texas. Follow her on Parler.