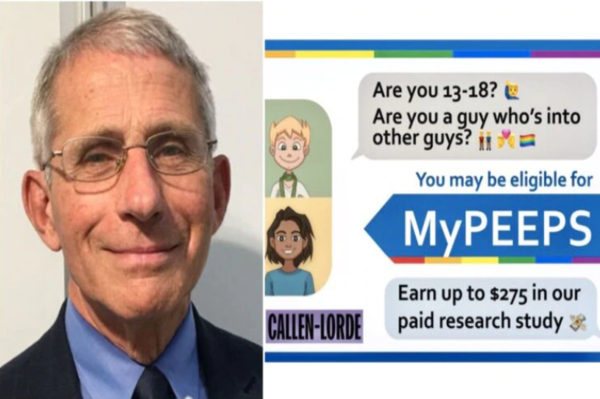 (bigleaguepolitics) – The National Institutes of Health (NIH), the infamous federal agency that is tied deeply to Dr. Anthony Fauci, has paid $8 million on a program encouraging LGBT children to report their sexual experiences to federal perverts.

The NIH developed the MyPEEPS app that allowed children to submit this information without parental consent. The app is geared toward “young men who have sex with men” in order to provide “interactive games and activities” that make it seem fun to submit their personal sexual habits for likely pedophiles to read them at get their jollies.

“There is an ethical balance between investigators’ desire to enroll children in a study and the need to support parents in caring for their children,” Dr. Monique Wubbenhorst, former deputy assistant administrator in the Bureau for Global Health at the U.S. Agency for International Development, said to the Washington Free Beacon, who broke the story.

“There are additional concerns that minor children in this study may be engaged in sexually exploitative relationships with older males, sex trafficking/child prostitution, violence, and sexual abuse, from which they should be protected,” Wubbenhorst added.

Big League Politics has reported on the wall-to-wall promotion of the LGBT lifestyle to children in recent years:

“The instructor of an Indiana class called “Kids Pole Too!”, which pushes pole dancing classes on children, is reportedly married to a child sex offender.

The ads for the class claim they will “combine an element of dance and aerobics for your child.” They went viral on social media due to the outrage of the class sexualizing children.

Additionally, Tiffs Pole Fitness Inc. offers “extra flirty flow classes” for children between the ages of 7 and 12. The page has since been scrubbed after people became outraged by its blatant exploitation of innocent children.

“I have deleted one of my recent posts because the shares and views have extended far beyond our community & area. I didn’t anticipate that it would begin to go viral & I want to protect the privacy of my students & our small community,” she wrote.

Making matters even worse, Tiff’s Pole Fitness owner, Tiffany Huebner, is reportedly married to child sex offender, Maxwell Garrett Huebner. He was charged and convicted of a sexual offense with a minor less than 16 years of age in 2009, according to reporting from 4w Feminist News.“

While it can be expected that LGBT predators may want to target children with their vicious sexual propaganda, the fact that this sort of behavior is being pushed with federal money is abominable. Dr. Fauci, America’s Mengele, has hit a new low.