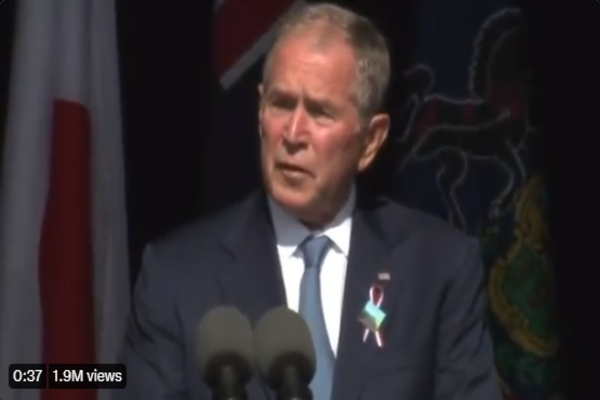 (breitbart) – Many media and political figures expressed outrage online after former President George W. Bush appeared to use his speech commemorating the 20th anniversary of 9/11 to compare January 6 Capitol protesters to the Islamic terrorists who viciously attacked America, killing nearly three thousands innocents and wounding more than double that number.

Speaking at the 9/11 memorial service for Flight 93 in Pennsylvania, Bush recalled the September 11 attacks while warning of future terrorist threats to the United States.

“We have seen growing evidence that the dangers to our country can come not only across borders but from violence that gathers within,” he said.

Alluding to American citizens who stormed Capitol Hill to protest the 2020 election, the former president stated:

In response to the comparison, many took to Twitter to express outrage.

“There is no comparison between 9/11/2001 & 1/6/2021,” tweeted ACT for America, a grassroots movement “dedicated to preserving America’s culture, sovereignty and security.”

“George W Bush is an imbecile,” the group added.

“The only place Bush should be on 9/11 is answering to the American people for all his lies,” Washington Congressional candidate and retired Army Special Forces chief warrant officer Joe Kent wrote.

“Instead he’s just showing us that the regime is not just one party, it’s the ruling class that despises us & is not done exploiting us,” he added.

“When Occupy Democrats is cheering George W Bush you might be confused if you haven’t been paying attention,” political correspondent Jack Posobiec wrote.

“Bush is publicly comparing 9/11 to Jan 6,” he wrote in another tweet. “They want Trump supporters treated like jihadists.”

“Are you paying attention yet?” he added.

“I have personally overlooked many things from former President George W. Bush but his comparison between Trump voters and the Jihadists from 9/11 is an absolute disgrace,” retired U.S. Air Force Col. Rob Maness wrote.

“The more I hear from George W Bush, the more I realize there was never really a choice in presidential elections in my lifetime until 2016,” Washington comic and columnist Tim Young wrote.

“George W. Bush, the man who brought us torture, indefinite detention, assassination, and mass surveillance, rebukes those who’ve turned their backs on the ‘America I know,’” journalist Matt Taibbi wrote.

“My disgust over this stupidity knows no bounds,” conservative activist Ned Ryun wrote.

“After 20 years of a war on terror abroad, [George W. Bush] wants to now fight a new one against his fellow citizens,” journalist Greg Price wrote.

“One of Bush’s many failures was to saddle the U.S. with DHS & TSA, forever treating citizens as possible terrorists—instead of forcing our enemies to change their way of life instead,” Claremont Institute president Ryan P. Williams wrote.

“I can’t think of anyone else who’s made such a disgusting disgrace of his legacy,” he added.

“I don’t understand how George W. Bush could even say something like that many Trump supporters are the same that answered the call to arms from Bush,” Republican congressional candidate and combat veteran Samuel Williams wrote.

“Many lost their lives or maimed doing so,” he added.

“Bush gave a speech on 9/11 today and all I heard was that guys like me – who went to war under him AND his father – were a terrorist threat to our country,” columnist Kurt Schlichter wrote.

“He’s trash and I’m done with him and his whole cabal,” he added.

“He also assails the very people he sent to fight and die in his disastrous wars,” he added. “He’s the worst president ever.”

“Bush is a disgrace for this,” conservative commentator Lisa Boothe wrote.

“I don’t know what this is even designed to mean other than to be incendiary on a dark anniversary,” Meghan McCain, daughter of the late Sen. John McCain (R-AZ) and former co-host of The View wrote.

“Was George Bush referring to the domestic terrorism organized through Antifa and BLM riots all over our country?” Rep. Marjorie Taylor Greene (R-GA) asked.

“I certainly hope so,” she replied.

“On a solemn day—where many of us are paying respect to the lives of those who were lost through remembrance, prayer, and acts of service—Bush is crafting the narrative that AMERICANS are the new terrorists,” Rep. Anthony Sabatini (R-FL) wrote.

“What an absolutely sick individual and an embarrassment to our Nation,” he added.

“I didn’t think George Bush could disgrace himself any more than he already has,” Dr. Sebastian Gorka, radio host and former deputy assistant to former President Trump, wrote.

While Republicans heaped criticism on Bush’s remarks, Democrats praised the former president despite their longtime disdain for him.

According to journalist Glenn Greenwald, “Liberals swooned emotionally” for the former president “because they crave his War on Terror, but just want it unleashed domestically at their political opponents.”

President Joe Biden called Bush’s speech “really good,” adding that it was a “genuinely good speech about who we are.”

“Thank you, my friend,” he said, “for your powerful and much-needed words on this difficult day.”

“Many of the same people who are clamoring about the threat of terrorism from abroad are ignoring-and even enabling-the more urgent threat of domestic terrorism like the insurrection of 1/6,” he added.

“George W. Bush is right,” the Democratic Coalition tweeted. “We must always remain vigilant against terrorist extremists both at home and abroad.”

“And we cannot rest until all of Trump’s traitorous, insurrectionist foot soldiers face justice,” the group added.

“Even George W. Bush now recognizes Trump, his supporters and those who directly participated in the 1/6 Coup attempt are terrorists – surely as the 9/11 ones were,” former ESPN and MSNBC personality Keith Olbermann, wrote.

“I’ll say it again: Trump damaged America in a way Bin Laden only dreamed of,” he added.