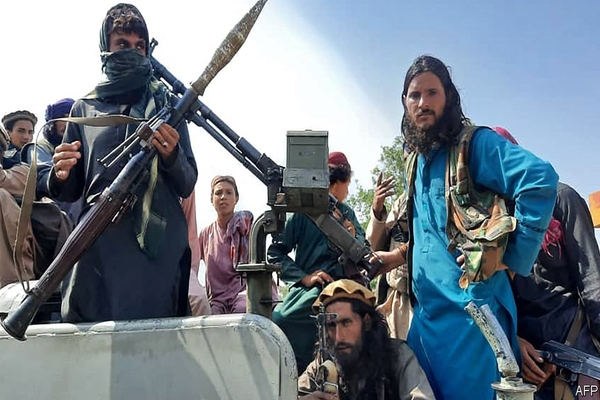 (breitbart) – Disturbing video out of Afghanistan this week showed Taliban fighters holding the severed head of an Afghan soldier in celebration of a gruesome execution.

The 30-second video, shared to an online chat room, showed Taliban fighters chanting “Mujahideen” while holding the soldier’s severed head by the hair, according to Daily Mail.

Six of the men were holding rifles and another was clutching on to two bloodied knives.

It is believed the man on the ground was an Afghan soldier due to the color of his dark green uniform – similar to that given to the national army by the US.

They then start shouting praise for the Taliban’s supreme leader Hibatullah Akhundzada.

The video ends with the group stating they must shoot the Afghan soldiers because ‘he has to look shot’.

The Arabic term “Mujahideen” refers to Muslims who fight on behalf of Islam. The gruesome video erupted online shortly after Taliban spokesman Suhail Shaheen said the Taliban has grown into a kinder, gentler regime dedicated to the people of Afghanistan.

We are the people of Afghanistan. Many of us were doing the jihad, the resistance, against then Soviet union and now the 20 year occupation by the US and allies.

Now, we are focusing on lifting the lives of our people, the construction of Afghanistan, creating jobs for our people, building a welfare state.

If I compare it to the past, we had a domestic war, fighting. But now we are focusing more on our economic activities, on creating jobs, expanding education, other needs of the people.

Violence is not the official policy. If everyone wants to have a demonstration they should get permission from the minister interior and state the demonstration will take place.

Just this past week, President Joe Biden’s administration referred to the Taliban as “businesslike and professional.”

“The Taliban have been cooperative in facilitating the departure of American citizens and lawful permanent residents on charter flights from HKIA. They have shown flexibility, and they have been businesslike and professional in our dealings with them in this effort,” National Security Council (NSC) Spokesperson Emily Horne said.

This past August, activist and former Afghan judge Najla Ayoubi alleged that the Taliban burned a woman for her bad cooking. “They are forcing people to give them food and cook them food. A woman was put on fire because she was accused of bad cooking for Taliban fighters,” Ayoubi told Sky News.

Last week, Taliban special forces fired their weapons in the air to forcefully disperse a women’s rights protest in Kabul.