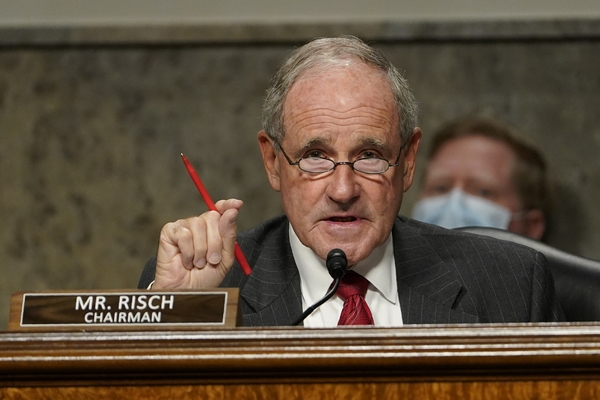 Risch spoke ahead of the Energy and Natural Resources Committee voting along party lines, 10–10, for Stone-Manning after heated debate about the nominee’s role in delivering a letter in 1989 on behalf of a since-convicted ecoterrorist.

The Idaho senator, who earned a forestry degree before becoming a successful trial lawyer and later governor of Idaho, explained during the meeting that tree spiking can be deadly because saws explode the way “a hand grenade goes off.”

“Shrapnel goes every direction. It destroys the saw, be it a band saw or a circular saw. … It will either kill or injure anyone that is within range of the shrapnel,” Risch said.

While she was a graduate student at the University of Montana in Missoula in 1989, Stone-Manning mailed a profane letter to the U.S. Forest Service on behalf of John P. Blount, an individual in her “circle of friends,” alerting federal authorities that trees in Idaho’s Clearwater National Forest that were scheduled to be cut down had been sabotaged with metal spikes.

After the Forest Service received the letter, Stone-Manning and six other individuals in Missoula were the target of a 1989 grand jury investigation for which they were subpoenaed and required to submit fingerprints, as well as handwriting and hair samples. However, the 1989 grand jury did not uncover enough evidence to charge Blount or anyone else with the crime. The case was not solved until Blount’s ex-wife reported him to authorities two years later, and in doing so, also named Stone-Manning as the person who mailed the letter for him. In exchange for immunity, Stone-Manning testified in a 1993 trial against Blount, who was later convicted for the tree spiking crime and sentenced to 17 months in prison.

In a questionnaire ahead of Stone-Manning’s June committee hearing, she reported inaccuracies about the tree spiking case, including falsely claiming she was never the target of a federal investigation.

Risch during his remarks also warned spikes in his state’s forest are “still there,” saying he spoke to the Forest Service and was told authorities were unable to remove any leftover spikes because they had no way of knowing which trees they were in.

A partial transcript of Risch’s remarks is below (emphasis added):

I’ve only been on this committee 13 years, but I’ve got to tell you, this is probably the most significant act of an insult to a really good agency and the people in that agency that I’ve ever seen perpetrated by this committee.

I don’t know how this nomination has gotten this far, but I think that we ought to spend some time looking at that.

Let’s first of all talk about what tree spiking is for a minute. This is a tree spike. Looks pretty harmless. You put that into a tree, and it sits in a tree until the tree is cut, and cut up, and taken to the mill.

I’m probably the only one in this room that’s ever ridden a carriage. I don’t know if you know what a carriage is, but a carriage is a piece of equipment in a mill on which the log is set. A person drives that carriage back and forth and saws it into logs.

Now that’s all well and good. The saw can be one of two types, either a circular saw in a small mill or, more likely, a large band saw that goes probably to the roof here and down again. It’s probably an inch and a half wide and double.

What happens when the saw hits this spike is what happens in a war when a hand grenade goes off. Shrapnel goes every direction. It destroys the saw, be it a band saw or a circular saw, and it will break this [spike] also into shrapnel. It will either kill or injure anyone that is within range of the shrapnel. That’s what tree spiking is.

I studied forestry as most of you know. We didn’t even study [tree spiking] because it didn’t exist back when I was in forestry school. It was only when ecoterrorism, and particularly that involved with the national forests, hit its peak that some genius came up with this idea of how to kill people that are working in the forest industry. That’s what tree spiking is.

Some of my friends that I’ve talked with in Congress here have said, “Well, she made a mistake 30 years ago.” This was not a mistake. This was a knowing, willful, intentional act done with a black, abandoned, and malignant heart, intended to kill a fellow human being. This is not a mistake. A mistake is when you reach in your sock drawer and you take out two socks that don’t match.

This is an intentional act for which people are sent to prison, and should be.

You know, I’ve prosecuted I don’t know how many cases. This, for a prosecutor, is shooting fish in a barrel.

She shouldn’t be in front of this committee for confirmation to a major, major point in this administration; she should be in front of a jury, explaining to them why she committed perjury and why she lied to Congress.

My friends, look, if you want to confirm her, you absolutely can. But believe me, this stain on this administration will last for the next three and a half years.