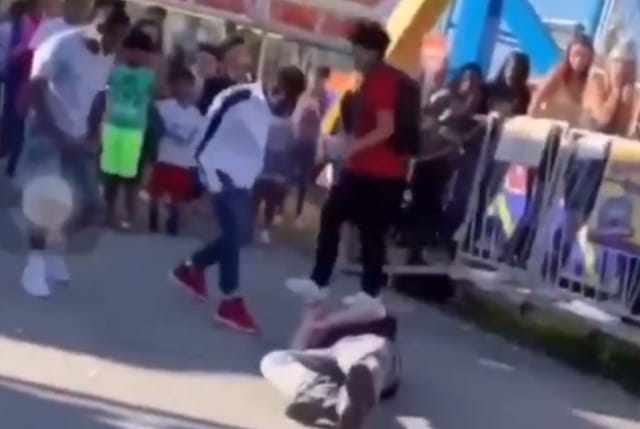 (Gateway Pundit) – A 59-year-old man attending the Great Frederick Fair in Maryland Friday was set upon by a pair of teenage brothers who attacked and killed him after he refused their demand to give them a dollar, according to officials.

Video of the attack shows the man, later identified as John Weed from Mount Airy, knocked out from being sucker punched and then being spat on as he was limp on the ground. Weed was white, the teens charged in the attack are black. Weed was reportedly punched in the back of the head by one brother and then a few minutes later he was fatally punched in the face by the younger brother.

A later viral copy of the video falsely blames the victim, “A white supremacist tried to racially antagonize a group of Black kids at the Frederick Fair in MD. He started calling them the N-word, and one of the kids, fearing for his life, punched the racist man. The white supremacist later died and two innocent Black victims were charged”.

A Maryland State’s attorney told reporters Monday the attack was over a demand for a dollar and a “negative dialogue” in regard to that dollar demand.

Initial press release on the attack by the Frederick County Sheriff’s Office:

On Friday, September 20th at approximately 5:36 p.m., Frederick County Sheriff’s Office deputies assigned to the Great Frederick Fair were notified of an assault near the midway area of the fairgrounds. A short time later, deputies located the victim, a 59 year old white male, lying unconscious on the ground. EMS responded and the victim was flown out by Trooper 3 to R. Cowley Adam’s Shock Trauma in Baltimore for further treatment. Criminal Investigators responded to the scene and interviewed numerous witnesses who indicated that the person assaulted was the victim of an unprovoked attack. As a result of the investigation, two juvenile suspects were able to be identified and were later located and arrested by the Sheriff’s Office. Interviews were conducted and both juveniles have been placed in the custody of the Department of Juvenile Services pending a hearing with a Circuit Court Judge. No weapons were used or mentioned in this incident. The first juvenile, a 15 year old black male, was charged with: 1st Degree Assault 2nd Degree Assault Reckless Endangerment The second juvenile, a 16 year old black male, was charged with: 2nd Degree Assault Late this afternoon, September 21st, the Sheriff’s Office was notified by the Shock Trauma Center that the victim in this incident had passed away. The victim was transferred to the State Medical Examiner’s Office for an autopsy. The Sheriff’s Office is currently consulting with the State’s Attorney’s Office to determine additional charges. Anyone with information related to this assault is asked to please contact Detective Jen Skelley at 301-600-1046, or through our tip line at 301-600-4131.

The press release was updated Monday with the name of the victim:

The victim of the deadly assault that occurred at the Great Frederick Fair on Friday, September 20th is identified as John Marvin Weed, 59, of Mount Airy. This investigation is still ongoing and the Sheriff’s Office is working closely with the States Attorney’s Office to determine appropriate additional charges. Information regarding additional charges will be released as soon as they are available. The Sheriff’s Office is urging any eyewitnesses to this incident to please contact Detective Hyatt at 301-600-7114. Tips may also be provided to our tips line by calling 301-600-4131.

Tuesday afternoon the FCSO reiterated their appeal for help on the case:

Video by WMAR-TV on the attack and a friend’s remembrance of John Weed.

UPDATE: Video by WJZ-TV with details of the case that features a courtroom statement by the suspects’ father at their arraignment:

“My son is not an animal. He’s never been in trouble. He made a mistake. He’s only fifteen. I feel for the other family. They lost a loved one. My son doesn’t deserve to spend the rest of his life in prison.”