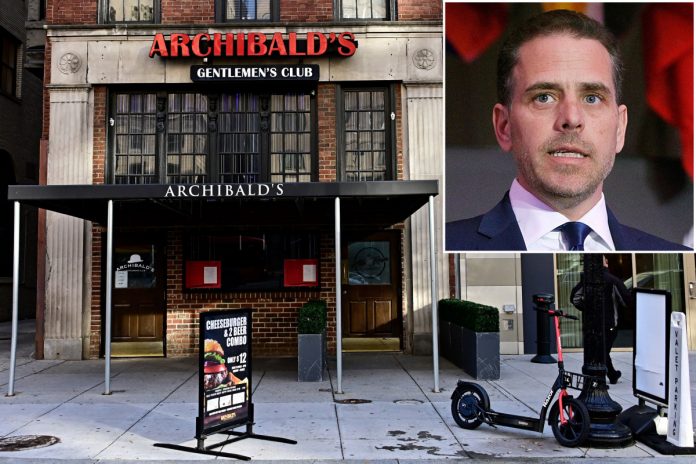 (Gateway Pundit) – As news of Hunter Biden’s fondness for strip clubs continues to unfold, revelations came out on Wednesday that not only did he impregnate a DC stripper, he also had sex toys used on him by dancers at the Hustler Club in New York City.

A salacious new report from Page Six details how the former Vice President’s son sent a staffer to buy a sex toy so that strippers could use it on him during one of his visits to Larry Flynt’s Hustler Club NYC in Hell’s Kitchen.

Page Six also revealed earlier this week that Biden was suspected of smoking crack in the VIP lounge of a DC strip club.

The sources also described Biden as a “good tipper.”

Earlier in the day, Page Six revealed that Lunden Alexis Roberts, the mother of Biden’s love child, was working at the Mpire Club in DuPont Circle under the stage name “Dallas.”

Several workers at the club told Page Six that they recognized Roberts, 28, from her time working there.

“Roberts worked there around the time she got pregnant — and when Hunter broke up with former sister-in-law Hallie Biden, the widow of his brother, the late Delaware Attorney General Beau Biden, sources said,” Page Six reports.

The report went on to say:

Archibald’s is located around the corner from the five-star St. Regis Washington, DC, hotel, where a valet recalled Hunter staying there “many times.” When shown a photo of Roberts and asked she ever went there with Hunter, the valet replied, “Honestly I can’t say, but Hunter Biden has been here with brunettes and blondes.”

Page Six noted that the Mpire Club is about three blocks north of another DC strip joint, Archibald’s Gentlemen’s Club, where he was suspected of smoking crack in the VIP room last year.

Archibald’s managing partner James Ritter told Page Six that one visit in late 2018 was marred by a “suspicion of drug use.”

“There was a smell of burning Styrofoam in the VIP room. We told him nothing illegal can go on here,” Ritter said. “We didn’t see anything illegal. After he was spoken to, the smell stopped.”

“VIP employees suspected it was crack,” he added.

Page Six reports that the incident took place at the time that Hunter was a board member of the Ukrainian natural-gas company Burisma, making as much as $50,000 a month.

“Workers at Archibald’s, located about three blocks north of the White House, said Biden was a regular there, with two bartenders and a security worker all instantly recognizing his photo and one worker identifying him by name,” the report states.

Ritter explained that Hunter spent “thousands and thousands of dollars in the Archibald’s VIP rooms,” and paid with “credit cards that didn’t have his name on it.”

While the club usually only allows credit cards that match a guest’s identification card, they made an exception for the former Vice President’s son.

“Whenever he was in town he came in for two days in a row, disappeared and come back a month later,” Ritter said.

It was recently revealed that Hunter, who has a long history of drug and alcohol abuse, fathered a child with an Arkansas woman while he was dating his brother’s widow.

Joe Biden recently snapped a reporter who asked about his son’s affair.