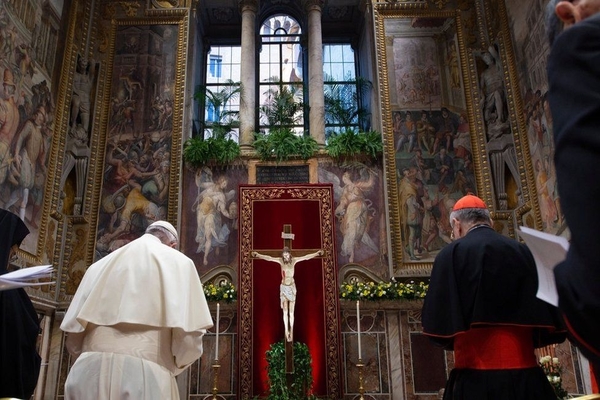 (breitbart) – Sixty Catholic Democrats in Congress have written an open “Statement of Principles” explaining why the Catholic Church should not deny Holy Communion to professed Catholics who promote abortion.

The open letter was published online on June 18 to coincide with the June meeting of the U.S. bishops, who discussed, among other things, the question of “Eucharistic coherence” and conditions under which a Catholic should not present himself to receive Holy Communion.

“As legislators in the U.S. House of Representatives, we work every day to advance respect for life and the dignity of every human being,” the letter states.

The representatives declare that “the weaponization of the Eucharist to Democratic lawmakers for their support of a woman’s safe and legal access to abortion is contradictory.”

The Catholic Church has consistently taught that taking an innocent human life in abortion is always gravely evil.

The Catechism of the Catholic Church states, “From the first moment of his existence, a human being must be recognized as having the rights of a person — among which is the inviolable right of every innocent being to life.”

Abortion “is gravely contrary to the moral law,” the Catechism declares, and, therefore, a person who procures an abortion incurs ex-communication from the Church “by the very commission of the offense.”

For his part, Saint John Paul II wrote that “direct abortion, that is, abortion willed as an end or as a means, always constitutes a grave moral disorder, since it is the deliberate killing of an innocent human being.”

The U.S. bishops’ Faithful Citizenship letter, a “teaching document on the political responsibility of Catholics,” underscores the evil of abortion, suggesting it is not “just another issue” to be weighed against prudential matters such as immigration laws or a carbon tax, but stands out as a singularly weighty moral issue.

“The threat of abortion remains our preeminent priority because it directly attacks life itself, because it takes place within the sanctuary of the family, and because of the number of lives destroyed,” the bishops declared in the letter.

In their June 18 letter, the Catholic Democrats insisted they “seek the Church’s guidance and assistance but believe also in the primacy of conscience.”

“In recognizing the Church’s role in providing moral leadership, we acknowledge and accept the tension that comes with being in disagreement with the Church in some areas,” they declare.