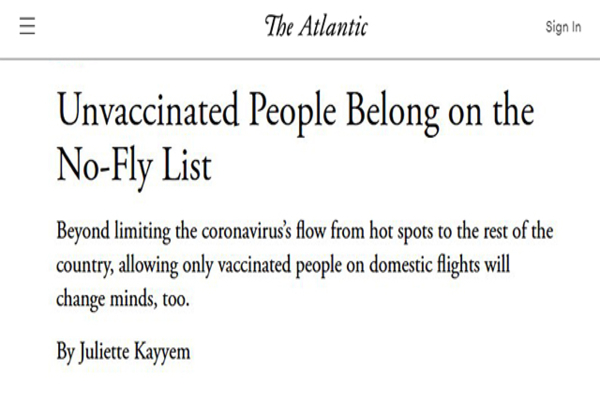 (informationliberation) – The Atlantic editor-and-chief Jeffrey Goldberg on Tuesday published an article from former Obama Homeland Security official Juliette Kayyem calling for unvaccinated people to be put on the No Fly List.

“Unvaccinated People Belong On The No-Fly List,” the headline read.

While flying, vaccinated people should no longer carry the burden for unvaccinated people. The White House has rejected a nationwide vaccine mandate—a sweeping suggestion that the Biden administration could not easily enact if it wanted to—but a no-fly list for unvaccinated adults is an obvious step that the federal government should take. It will help limit the risk of transmission at destinations where unvaccinated people travel—and, by setting norms that restrict certain privileges to vaccinated people, will also help raise the stagnant vaccination rates that are keeping both the economy and society from fully recovering.

Kayyem said that stripping people of their rights will help “change minds”:

Flying is not a right, and the case for restricting it to vaccinated people is straightforward: The federal government is the sole entity that can regulate the terms and conditions of airline safety. And although air-filtration systems and mask requirements make transmission of the coronavirus unlikely during any given passenger flight, infected people can spread it when they leave the airport and take off their mask. The whole point of international-travel bans is to curb infections in the destination country; to protect itself, the United States still has many such restrictions in place. Beyond limiting the virus’s flow from hot spots to the rest of the country, allowing only vaccinated people on domestic flights will change minds, too.

Polls suggest that vaccine holdouts have a variety of motivations: genuine concerns about side effects; skepticism of shots not yet fully approved by the FDA; a general aversion to vaccines; a desire to stick it to the libs; a reluctance to decide—even now. In a recent New York Times and Kaiser Family Foundation poll, 46 percent of unvaccinated people who consider themselves in the “wait and see” category disclosed that they would stop waiting if they could get a shot from their personal physician. Forty-four percent agreed that the FDA’s full approval of the vaccines would motivate them. And 41 percent said that a prohibition on airline travel would get them closer to their shots. Tellingly, 11 percent of those adamantly opposed to vaccination would also be motivated by a travel ban—a larger effect for these respondents than full FDA approval or the ability to get vaccinated at their doctor’s office would have. More than another recitation of statistics about vaccines’ benefits or yet another appeal to the common good, the deprivation of movement will win over doubters. Some unvaccinated Americans in areas where vaccination seekers face scorn among their peer group may even be happy to have an excuse to protect themselves.

The public debate about making vaccination a precondition for travel, employment, and other activities has described this approach as vaccine mandates, a term that, to conservative critics, suggests that unvaccinated people are being ordered around arbitrarily. What is actually going on, mostly, is that institutions are shifting burdens to unvaccinated people—denying them access to certain spaces, requiring them to take regular COVID-19 tests, charging them for the cost of that testing—rather than imposing greater burdens on everyone. Americans still have a choice to go unvaccinated, but that means giving up on certain societal benefits. Nobody has a constitutional right to attend The Lion King on Broadway or work at Disney or Walmart. Employers and entertainment venues are realizing that they can operate more easily without the hassle of planning around unvaccinated employees and customers. Amid a global health crisis, people who defy public-health guidance are not, and do not deserve to be, a protected class.

[…] The Biden administration could give unvaccinated Americans a brief window in which to get shots. A travel rule that took effect by October would cover those who hope to visit relatives during the holiday season. Vaccine verification and legitimate exceptions for age or preexisting health conditions can be part of airline databases, as are other security features. The current reliance on paper vaccination cards makes for a clumsy system, but better public- and private-sector systems are likely to emerge if employers, entertainment venues, and the TSA all seek to verify individuals’ status. Some people may try to lie and cheat their way around a TSA requirement, but violating federal aviation-safety measures is generally a crime.

Other than the New York Times, The Atlantic is likely the most influential paper guiding our managerial elites.

I suspect Kayyem is already working on this proposal together with current DHS head Alejandro Mayorkas, who just recently reportedly put America First commentator Nick Fuentes on the No Fly List for his political beliefs and has been working for months now on expanding the No Fly List to ban all opponents of the regime from air travel.

Jeffrey Goldberg appears to have went and changed the headline of Kayyem’s article to “Unvaccinated People Need to Bear the Burden” after getting backlash but the content of the article remained the same.

Goldberg is best known for helping lie America into the war in Iraq. Rather than be punished for conning America into war he was rewarded lavishly for it and is now guiding our occupiers on how best to strip the American people of their rights.