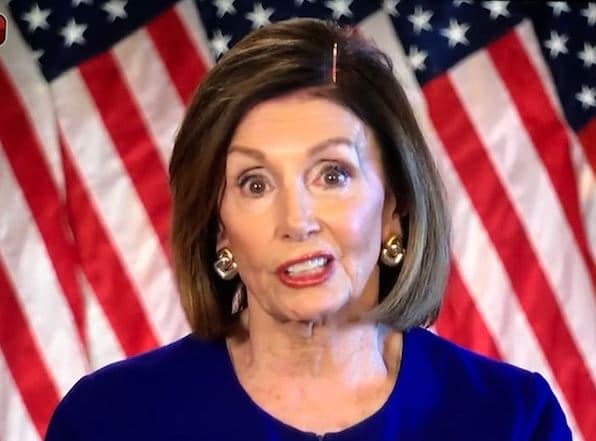 (Gateway Pundit) – On April 4, 2019 Senator Jim Inhofe (R-OK) wrote an op-ed in the Politico which effectively ends the current witch hunt against President Trump by the power-crazed Democrats.

In the op-ed — back in April — Inhofe supported President Trump’s statement about why he delayed (not “withheld” in quid pro quo) the military aid for Ukraine— a decision made long before his phone conversation with the Ukraine president, on July 25th, that started Pelosi’s latest garbage impeachment inquiry.

This excerpt clearly proves that President Trump delayed aid to Ukraine for the Trump-signature reason: to demand other affected countries contribute their share to the military aid needed to help Ukraine resist Putin’s aggression—just as Trump said recently.

President Trump took the same stance he has always taken: to make decisions that benefit the United States. Moreover, the Trump administration had already approved lethal aid for Ukraine last year—aid which the Obama administration refused to approve, despite the same bipartisan support in Congress, since the creation of the Department of Defense’s Ukraine Security Assistance Initiative in 2015. Democrats and fake news like to omit or lie about important facts.

Clearly, President Trump was considering withholding aid to Ukraine long before his phone call with the president of Ukraine. This Inhofe op-ed was published on April 4, 2019:

“Last year, Ukraine received its first lethal aid from the United States thanks to the Trump administration’s approval of a sale of Javelin anti-tank missiles — a critical step the Obama administration refused to take despite bipartisan support in Congress. The Trump administration also notified Congress in February that, for the first time since its creation in 2015, funds for the Department of Defense’s Ukraine Security Assistance Initiative will be used to provide lethal aid, including sniper rifles and shoulder-fired grenade launchers. I commend the administration for these two “firsts.”

Now it’s time to increase funding for the Ukraine Security Assistance Initiative, as well as the State Department’s security assistance programs. And a larger share of this funding should go to support defensive lethal aid that will make Ukraine a more difficult target for Putin’s aggression.

After Putin’s Black Sea attack, Ukraine’s maritime capabilities must be enhanced by accelerating acquisition of coastal defense radars, patrol boats, coastal defense and anti-ship missiles and other systems. On the ground, Ukraine needs more Javelins, other anti-tank weapons, electronic warfare systems and advanced counter artillery radars. And in the air, we should examine how to assist Ukraine in improving its air defenses.

Of course, the response of the free world to Putin’s aggression is not the responsibility of the United States alone. Canada, Lithuania, Poland and the United Kingdom have been providing security resources to Ukraine. We need more allies and partners to step up with action rather than talk”.