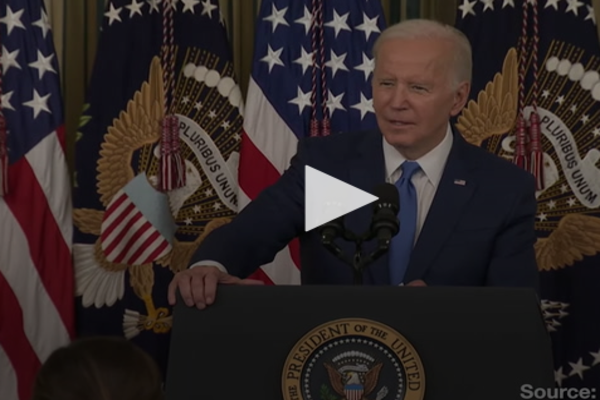 (breitbart) – President Joe Biden taunted the media, pundits, and pollsters on Wednesday for their predictions of a Republican “red wave” in the midterm elections, telling Americans he would not change his policies after Democrats did better than expected.

“I’m not going to change anything in any fundamental way,” he said.

Biden held a press conference at the White House to talk about the midterm election results, where he argued that Democrats had a “strong night” even though there was strong possibility of losing their majority in the House of Representatives.

When reporters asked the president about the future of his agenda and what he would change, Biden replied, “Nothing.”

Voters, he argued, were “just finding out what we’re doing” on inflation.

“The more they know about what we’re doing, the more support there is,” he claimed.

Biden also mocked predictions of a Republican takeover in the midterms.

“While the press and the pundits are predicting a giant red wave, it didn’t happen,” he said.

He also dismissed pollsters for predicting tough races for Democrats.

“I don’t look at them much anymore. I’m not quite sure how to read them anymore,” he said when asked about polls showing voters frustrated with inflation.

Biden said he would speak with House Majority Leader Kevin McCarthy on Wednesday about working together when he became the speaker.

Biden said he would not budge on cutting taxes on the wealthy, cutting Social Security, walking back green energy investments, or limits on abortion.

“I have a simple proposition. I have a pen that can veto,” he said.

The president indicated that Republicans were struggling politically and would increasingly walk away from former President Donald Trump’s political movement.

“I don’t think we’re gonna break the fever for the Super–Mega–MAGA Republicans — I think they’re a minority of the Republican Party,” he said.

When one reporter noted that Trump’s movement was still strong, Biden chuckled and replied, “Oh yeah?”