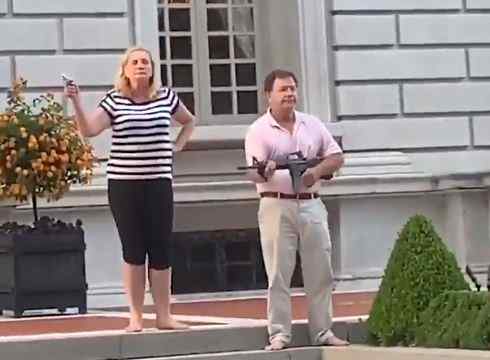 (Gateway Pundit) – St. Louis Police have served a warrant on Patricia and Mark McCloskey, the armed couple who defended their beautiful and historic home from rioters last month.

Police seized the rifle that Mark McCloskey was seen holding in videos of the incident that went massively viral.

“Late Friday evening 5 On Your Side confirmed attorney Al Watkins was no longer representing the McCloskeys, and that attorney Joel Schwartz had taken over. Schwartz confirmed a search warrant was issued at 8 p.m. Friday night, but would not say what was taken from the home. Schwartz also said he does not know where the handgun is,” local station KSDK reports. “Schwartz told 5 On Your Side he does not believe charges are warranted against the McCloskeys and that he hopes to meet with St. Louis Circuit Attorney Kim Gardner’s office next week, but that there is no official appointment at this time.”

No charges are known to have been filed against the couple at this time.

The couple was doxed and threatened by insane leftists for daring to take a stand against the rioters. Many have been demanding charges against the couple for exercising their Second Amendment right.

In livestreamed footage of the incident, you can clearly see protesters enter a gate into the private neighborhood. They also threaten to take the gun from Patricia McCloskey.

St. Louis Circuit Attorney Kim Gardner Has a Long History of Outlandish Behavior and Dangerous Policies Before She Started Harassing the McCloskeys

Far left billionaire George Soros has been systematically targeting district attorney races throughout the United States for several years now. Several of his candidates are already in office creating havoc.

Soros funded PAC even released an ad in support of this far left and unqualified nutcase.

Kim Gardner may be the most radical Soros-funded Circuit Attorney in the nation today.

Kim Gardner is so intolerable that two dozen attorneys and more than one-third of the trial lawyers left the office when she was hired. And this is a Democrat dominated office!

Gardner did not tell the officers what they did to get on her list but they were being censored.

Gardner refused to charge a drug dealer who was found with 1,000 opiate pills and 30,000 in cash because she didn’t like the cop involved.

And Gardner refused to charge the killer of a 7-year-old child despite a suspect’s confession.

Kim Gardner dropped the case against a suspect who shot another man in a traffic dispute in broad daylight.

Kim Gardner released all rioters and looters from jail without charges in the recent St. Louis Black Lives Matter riots.

Kim Gardner was even caught on video lying about being harassed during a traffic stop!

Kim Gardner withheld evidence in the hoax attack on Governor Eric Greitens that got him removed from office.

And last night Kim Gardner issued a search warrant to harass the St. Louis couple who defended their home on a private street from hundreds of far left activists.

But Kim Gardner is the real victim here.

In January Kim Gardner filed a federal civil rights lawsuit against several St. Louis City officials accusing them of of a racist conspiracy to force her from office.

This woman is bitter and insane.

And now she’s harassing home owners for defending their property.

What a train wreck.