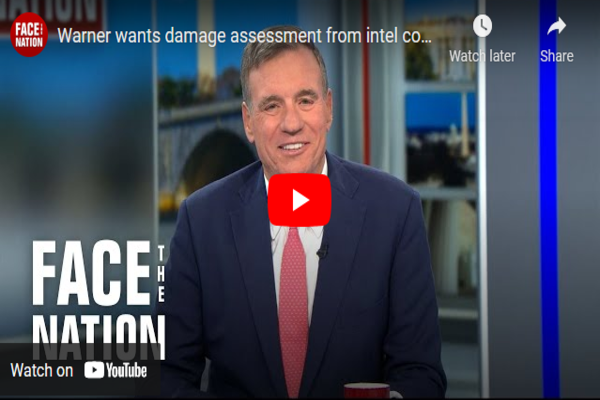 MARGARET BRENNAN: You know, 9/11 introduced to many Americans for the very first time, this sense of vulnerability at home, and it launched the global war on terror. I wonder how vulnerable you think America is now, are we paying enough attention to the Middle East and to Afghanistan?

WARNER: Well, Margaret, I remember, as most Americans do, where they were on 9/11. I was in the middle of a political campaign and suddenly, the differences with my opponent seem very small in comparison and our country came together. And in many ways, we defeated the terrorists because of the resilience of the American public because of our intelligence community, and we are safer, better prepared. The stunning thing to me is here we are 20 years later, and the attack on the symbol of our democracy was not coming from terrorists, but it came from literally insurgents attacking the Capitol on January 6th. So I believe we are stronger. I believe our intelligence community has performed remarkably. I think the threat of terror has diminished. I think we still have new challenges in terms of nation-state challenges, Russia in longer-term, a technology competition with China. But I do worry about some of the activity in this country where the election deniers, the insurgency that took place on January 6th, that is something I hope we could see that same kind of unity of spirit.