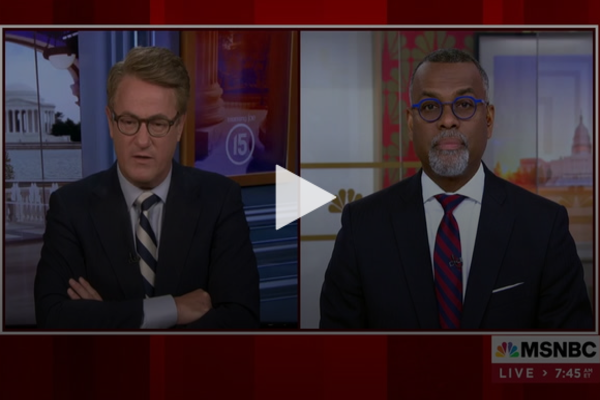 Glaude, who noted he was from Mississippi, advised that Independence Day was “framed by Juneteenth” and “the way in which we struggle with the legacies of slavery.”

“You know, the 4th of July has always been an incredibly vexed holiday for me given the tradition out of which I come,” Glaude outlined. “It’s framed by Juneteenth, the way in which we struggle with the legacies of slavery. But I want to echo something that I got from Secretary of the Smithsonian Lonnie Bunch, and I just kind of, you know, used it earlier, Joe, that America is more than an idea. It’s more than an argument. It’s a fight. And the tradition out of which I come are those people who in some ways America turned its back on, who have fought for generations for an idea of America that’s more just, more loving, more open.”

He continued, “And it’s in that sense because my great grandmom is buried in Moss Point, Mississippi, and so, this place is mine. And all of its ugliness and all of its beauty and all of what it can be. And I think that’s where, you know, I kind of reside in that poem from Langston Hughes, and in that speech by Frederick Douglass, the July 5 speech, you know, both kind of give voice to the aspirational claim of who we can be and to kind of set ourselves up to fight for that vision of who we can be.”