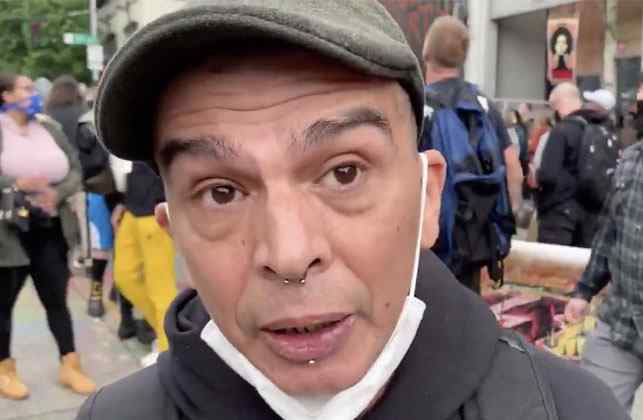 (Infowars) – A citizen from the newly declared Seattle Autonomous Zone or CHAZ warned White America that if things didn’t change that property damage, looting and violence would continue.

The man identified by Post Millennial Editor-at-Large Andy Ngo as Luis Marquez, a prominent member of radical left-anarchist group Antifa, made the statement in a brief interview to Elijah Schaeffer.

Ngo wrote: “That’s Luis Marquez. He’s a prominent Antifa militant in the Portland area who travels to other states. But the media will tell you there are no antifa in the occupation zone.”

In the brief clip, Marquez says: “The only time we are heard is when we burn sh*t down and if white America doesn’t want to get it right they are going to see more burning, more looting.”

“So, I’m from Portland and I love what’s going on here in Seattle, and I stand in solidarity with them, but I don’t agree with everything.”

CHAZ, or the “Capitol Hill Autonomous Zone” in Seattle has drawn controversy over its inception, conceived when a local police precinct abandoned its building and the six block area during the recent George Floyd riots in an effort to ease tensions. Seattle Police Chief Carmen Best denies that leaving the area was her decision.

Now, the six-block area has declared itself an “autonomous zone” with a Soundcloud rapper by the name “Raz” acting as the zone’s warlord, complete with private police.

Seattle Police Chief Carmen Best reported that 911 calls from inside CHAZ more than tripled as police were unable to instill law and order within the zone.

National File will continue to keep abreast with any new developments from the anarchist autonomous zone.

Video: Antifa created their own country in downtown Seattle, and things aren’t going so well.