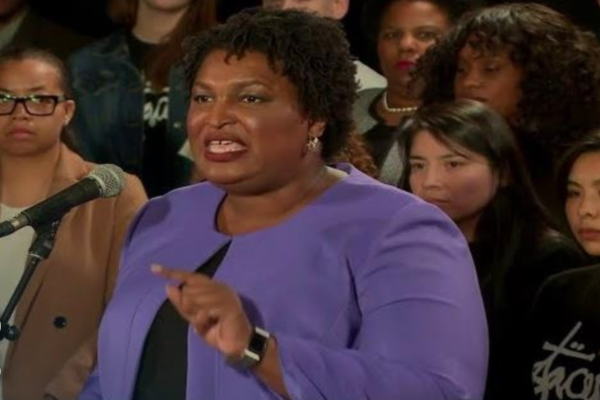 (breitbart) – Election denier Stacey Abrams (D-Liar) is already spinning her upcoming gubernatorial loss by denying an election that has yet to conclude.

Although we see record turnout in Georgia, Abrams is out there blaming this loss on voter suppression and — get this — the ignorance of black men.

Nevertheless, Abrams refused to concede and continued to insist she won. In fact, four years later, she still hasn’t conceded, even as she launched a rematch against Kemp.

Well, now the insufferable Abrams is getting walloped in the polls. In the RealClearPolitics polls of polls, she’s losing by an average of 8.1 points. Some polls have her down by double digits. The President of Earth is staring dead in the face of a straight-up humiliation and the end of her career as a political superstar.

Before we get to the liars lies, let’s look at this fact…

Knowing this, any intelligent or honest person would say, Gee, Wally, if that’s the case, there certainly isn’t any voter suppression going on.

Well, no one ever claimed Stacey Abrams was intelligent or honest. Oh, she’s shrewd and mercenary to her corrupt core. But honest and intelligent? Yeah, no. Because here’s Earth President Abrams pre-blaming her upcoming humiliation on voter suppression in an election that’s seeing … record turnout:

While the polls are always going to tell the story you want to see, what we know is that the untold story is that this is a tight race, it is neck and neck, and we believe that we are on a path to victory if we can get all our voters turned out and if they can navigate the difficulties put in place by [Governor] Brian Kemp and [Secretary of State] Brad Raffensperger, to not only game the system but to suppress voting in the state of Georgia.

But here’s what she said immediately before the quote above to explain away the polls that show a shellacking is on the way:

The pollsters who are polling Georgia are looking at a state that looks like Indiana, not a state that looks like Georgia, where we have seen record turnout from African-American voters, record turnout from Latino and API voters. We are seeing a dramatic increase in participation, including 500,000 people who voted early [and] who did not vote in 2018.

So in her first breath, to explain away her terrible polling numbers, Abrams talks about record minority turnout. Then, in the next breath, she says the vote is being suppressed (remember, I reversed the quotes above).

The left-wing extremist interviewing her is MSNBC’s Ali Velshi. Obviously, he’s too corrupt to point out how Abrams shamelessly contradicted herself. So he says: “So the issue of getting all your voters turned out is the one that people are looking at?”

But-but-but Earth President Abrams just said there was record turnout. So how can getting voters “turned out” be an issue?

Then Velshi asks her about the black vote, which she’s been struggling with, and Abrams AGAIN brags about all this record turnout:

Then, after Abrams says all those black guys — a record number of black guys, donchaknow — are voting for her, she insults black men claiming they are too stupid not to be bamboozled by misinformation:

What was the middle thing again?

Abrams answers in the affirmative. Oh, yes! Voter suppression is why record numbers of people are turning out to vote:

So here you have Abrams blaming record turnout on voter suppression, her loss of support among black men based on their ignorance, and her own coming loss on both.