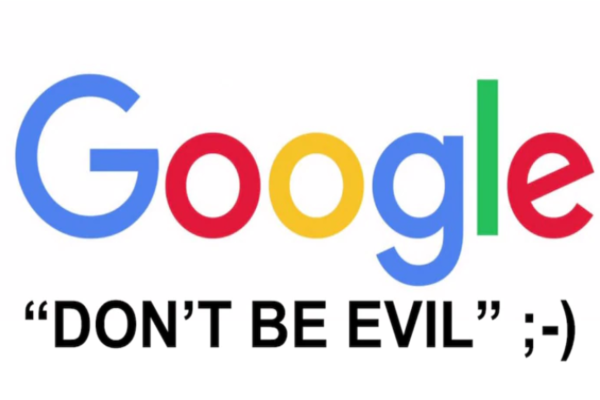 (bigleaguepolitics) – “Don’t be evil” is a phrase commonly used in Google’s company code of conduct, coined by the creator of Gmail Paul Buchheit in the early 2000s. Buchheit said he”wanted something that, once you put it in there, would be hard to take out”, adding that the slogan was “also a bit of a jab at a lot of the other companies, especially our competitors, who at the time, in our opinion, were kind of exploiting the users to some extent.”

It seems pretty self-explanatory, do the right thing. But has Google held true to this goal? Recent news from the big tech giant has brought this question to the forefront, with many wondering if the monopoly is truly a force for good.

A recent report by The Verge on Thursday indicated that Google will no longer allow advertisers, publishers, and YouTube creators to monetize content that “denies the existence of climate change.” The Alphabet Inc. owned company described the policy in a support document on the same day.

“Today, we’re announcing a new monetization policy for Google advertisers, publishers and YouTube creators that will prohibit ads for, and monetization of, content that contradicts well-established scientific consensus around the existence and causes of climate change,” the Google Ads team said in the document. “This includes content referring to climate change as a hoax or a scam, claims denying that long-term trends show the global climate is warming, and claims denying that greenhouse gas emissions or human activity contribute to climate change.”

Google claims it will use a mix of automated intelligence and human reviewers to engage in internet censorship. “When evaluating content against this new policy, we’ll look carefully at the context in which claims are made, differentiating between content that states a false claim as fact, versus content that reports on or discusses that claim,” Google said. Ads will still be allowed on climate topics like public debates on climate policy, research, and more, according to Google.

The pro-censorship and anti-free speech initiative marks Google’s second fascistic and openly admitted policy change in recent days, coming about a week after YouTube banned all ‘anti-vaccine’ content, not only just COVID-19-related material. Previously the company and other big technology firms also banned any content that suggested the COVID-19 virus came out of a lab, with the conglomerate recently backtracking on the decision after the mainstream media began to publicly entertain the possibility. YouTube’s crusade against freedom of speech appears to have no limits, with the company also banning videos claiming 2020 presidential election fraud.

Despite claims of the company to the contrary, the pro-censorship policies are clearly not evenly enforced, with Youtube videos of Hillary Clinton claiming that the 2016 presidential election was “stolen” on more than one occasion not facing the same consequences that those discussing the 2020 election routinely do.