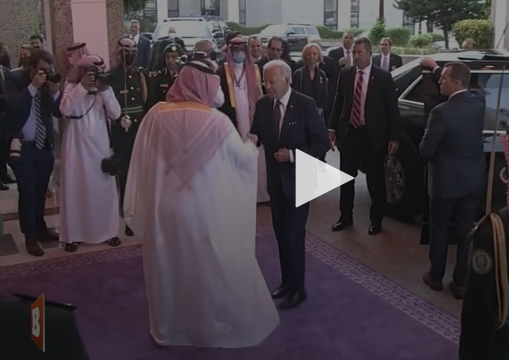 (breitbart) – President Joe Biden greeted Mohammed bin Salman with an awkward fist bump as he arrived at the Royal Palace in Jeddah, Saudi Arabia, on Friday for a series of meetings.

The president exited the presidential limo and extended his fist as Salman approached and tapped Biden’s fist with his own before the pair entered the palace.

Biden’s national security adviser Jake Sullivan was spotted rushing to catch up with the pair.

White House aides worked to prevent Biden from shaking hands with the Saudis, telling reporters before his trip that he was not expected to shake anyone’s hand during his trip to the Middle East due to the ongoing coronavirus pandemic.

But Biden shook hands with former Israeli Prime Ministers Naftali Bennett and Benjamin Netanyahu, indicating that he was willing to extend a friendly formal greeting to leaders in the Middle East.

The president is struggling with the optics of sitting down with Saudi leaders after vowing during his presidential campaign to treat Saudi Arabia as a “pariah” in the region after the murder of journalist Jamal Kashoggi.

Biden is also expected to urge the Saudis to increase oil production, as the United States continues to struggle with high gas prices.

The Saudis immediately shared a photo of Biden’s fistbump on social media and then later shared photos of the president shaking hands with Saudi King Salman bin Abdulaziz.

Later, reporters were brought into the room as Biden met with Mohammed bin Salman and other Saudi officials.

NBC’s Peter Alexander shouted a question to Salman, asking if he would apologize to the family of murdered columnist Jamal Khashoggi.

Alexander stated on social media that Salman smirked in response as reporters were escorted out of the room.

Khashoggi’s fiance sharply criticized Biden’s decision, sharing on social media what she viewed as a betrayal by the president.