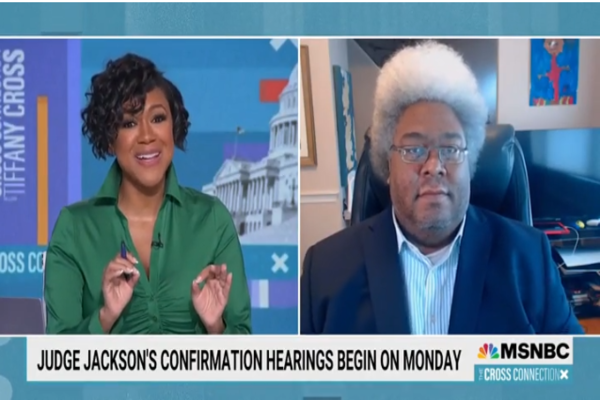 He argued that Hawley’s opposition to Jackson, based on alleged leniency on sex offenders, was a ploy to put her in harm’s way.

“[S]he is going to be confirmed, and she is going to be well-liked while she’s confirmed,” he said. “So them going to the mattresses against her is kind of a waste of their time. But I don’t want to let the Josh Hawley thing lie, because here’s, you know, like — here’s where I need the Democrats to step up — because when they try to smear her, I need the Democrats to get up there and defend her just as vociferously as Lindsey Graham defended alleged attempted rapist Brett Kavanaugh.”

“Like, I need that level of energy from the Democrats, especially when they come at her with these trumped-up alleged issues about her sentencing for sex offenders because what Josh Hawley is doing, let’s be very clear — what Josh Hawley is doing when he tries to do this, is he’s trying to get her killed,” Mystal continued. “He is trying to get violence done against a Supreme Court nominee.”

Mystal said “we know” this based on the reaction to the so-called episode.

“[Y]ou know how I know that Josh Hawley knows what Pizzagate is all about?” he added. “Because guess who’s the judge who sentenced the Pizzagate guy? Oh, that was Ketanji Brown Jackson.”