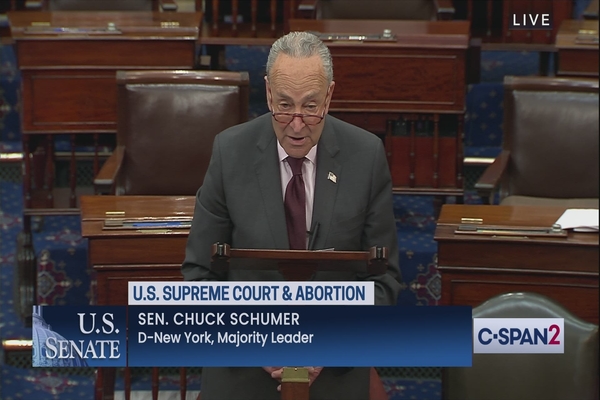 (breitbart) – Senate Democrats on Wednesday failed to pass legislation that would prohibit local, state, and federal governments from preventing abortions.

The Senate attempted to invoke cloture and end debate on S. 4132, the Women’s Health Protection Act of 2022. The motion failed 49-51, as Sen. Joe Manchin (D-WV) opposed the motion, and it required 60 votes to invoke cloture. The legislation would prohibit government restrictions on access to abortions. Specifically, the legislation states that governments may not limit a healthcare provider’s ability to:

The legislation, according to Congress.gov, stipulates:

In addition, governments may not (1) require patients to make medically unnecessary in-person visits before receiving abortion services or disclose their reasons for obtaining such services, or (2) prohibit abortion services before fetal viability or after fetal viability when a provider determines the pregnancy risks the patient’s life or health.

The bill also prohibits other governmental measures that are similar to the bill’s specified restrictions or that otherwise single out and impede access to abortion services, unless a government demonstrates that the measure significantly advances the safety of abortion services or health of patients and cannot be achieved through less restrictive means.

The Department of Justice, individuals, or providers may bring a lawsuit to enforce this bill, and states are not immune from suits for violations.

The bill applies to restrictions imposed both prior and subsequent to the bill’s enactment.

Sen. Marsha Blackburn (R-TN) said in a statement after the vote:

Today’s vote on the Women’s Health Protection Act is a continuation of the left’s mission to undermine the legitimacy of the Supreme Court and prop up their abortion-on-demand agenda. This bill would force states to legalize late-term abortions, remove informed consent laws, and prevent restrictions on gruesome fetal dismemberment procedures. Today, I stood up to the woke mob and voted to protect women and their unborn children.

Sen. Josh Hawley (R-MO), who voted against the bill, said that the bill “would disenfranchise every voter in Missouri, overturn our state laws – and give the power to DC Democrats.”